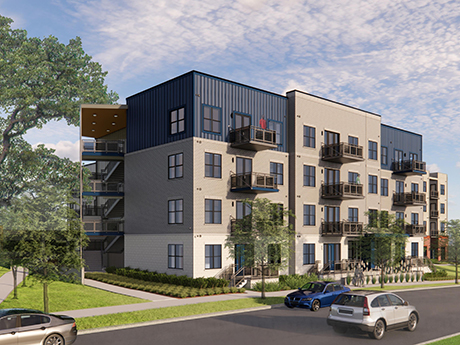 Amazon’s commitment to Metropolitan Development and Housing Agency consists of a $7.1 million loan to support the construction of Cherry Oak Apartments, a mixed-income residential development in east Nashville. (Rendering courtesy of SGS)

NASHVILLE, TENN. — Amazon plans to invest a total of $10.6 million to help build and renovate more than 130 affordable housing units in Nashville. The investment is in partnership with the Metropolitan Development and Housing Agency (MDHA) and supports the social work of the local nonprofit CrossBridge Inc., which provides housing and supportive services to adults overcoming addiction. The investment is part of the Amazon Housing Equity Fund, which has earmarked more than $2 billion to create and preserve 20,000 affordable homes in Nashville, Washington state’s Puget Sound region and the Arlington, Va., region, which is home to Amazon’s HQ2 campus.

The Seattle-based e-commerce giant has committed more than $94 million over the past two years to affordable housing efforts in Nashville. Amazon’s commitment to MDHA consists of a $7.1 million low-rate loan to support the construction of Cherry Oak Apartments, a mixed-income residential development in the Cayce Place neighborhood of east Nashville. Cherry Oak will feature 96 apartments, including 53 that are affordable at or below 80 percent of area medium income (AMI). MDHA has a 99-year ground lease at the site.

Amazon is also providing a $3.5 million grant to support CrossBridge’s housing projects on Lindsley Avenue in Nashville’s Rolling Hill Mill neighborhood. CrossBridge owns an entire city block, where the organization is completing a new 50-unit building and renovating and expanding an existing building into a 34-unit property. The grant will allow CrossBridge to complete its projects, operate at affordable rents and expand services.