Posted on February 7, 2022 by Jeff Shaw in Features, Multifamily 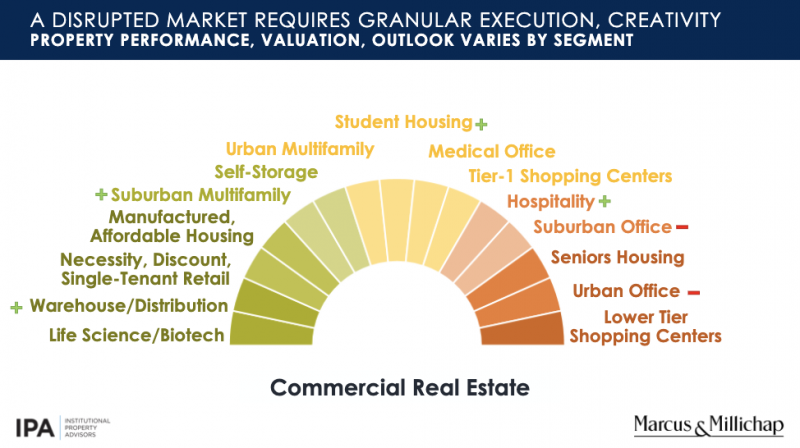 Marcus & Millichap President and CEO Hessam Nadji shared this slide during a recent webcast. Property types with a green plus sign have been improving in the past few quarters, and those with the minus sign, on a relative basis, have declined in occupancies and fundamentals.

Job losses, shortages of qualified labor in the workforce and the imminent impact of rising interest rates are all real-time threats to the economy, with the first rate increase expected in March.

Without sugarcoating the challenges ahead, Paulson says if history is any predictor, the next year or so is not going to be easy. “I’m not really optimistic about the core economic recovery,” he said. “I’m pleased with how the business community has responded, but here’s where I’m going to get more somber: Inflation is really serious, and I don’t think any of us can find an example in recent economic history where the Fed has been able to contain inflation like this and have a soft landing.”

On a positive note, the multifamily sector is expected to remain strong and gain even more momentum as investors shift capital to this relatively stable asset class. Real estate, in fact, is where Paulson’s outlook turns extremely optimistic.

“When I’m looking at constructing a portfolio, I want real estate to be part of it,” he said. “People are going to want to own real assets. When looking at capital preservation, I like real estate as an asset class. When I can find managers who know how to invest in that, I want to give them money.”

Nadji shared a graphic depicting a spectrum of asset classes that Marcus & Millichap has used to study commercial real estate through the pandemic, illustrating a vast difference in performance metrics and occupancy between the lowest end of the scale, lower-tier shopping centers, and the larger growth categories, like life science projects. Multifamily assets also occupy a favorable spot on the scale.

“The suburban multifamily rental market has created record demand,” Nadji said while presenting the chart. “Manufactured housing and affordable housing are in great demand, both in terms of residents and capital chasing the safety of apartments and better-performing assets,” he said. “There has been a big recovery in the student housing segment over the past year or so as well.

Nadji also looked toward what he called the lowest inventory of for-sale housing in many years, which is creating more pressure on pricing and making affordability more of an issue for a lot of consumers. “Combined with the notion of rising interest rates, the Fed almost has no option but to slow down the economy,” Nadji explained.

Nadji said that while there’s been incredible demand across the board, the Class A, newer construction apartment market has taken a bigger hit, primarily because those new deliveries were concentrated in urban America, which Nadji said was hit very hard during the pandemic and has since recovered. “Vacancies are at record lows with incredible demand for apartment housing across the country,” he said.

“We’ve seen record rent growth for a couple of quarters that is exceeding wage growth,” Nadji said. “So we have an affordability challenge on the apartment rental side of the equation. But the trade-out rent factor as eviction moratoriums have expired and the incredible new demand that’s coming in, especially to places like Florida, Texas, Arizona and Nevada that are the growth markets are hard to miss in all the reports I see.”

According to Hart, the multifamily sector is expected to remain strong, in part, because of how well the sector weathered the first phase of the pandemic. While landlords were concerned with the possibility of delinquencies or income loss at the start of the pandemic, Hart said, the infusion of billions of dollars in the hands of qualified renters actually ended up being beneficial to multifamily owners.

“As another result of COVID, fewer people were moving, so all these trends resulted in supply shortages that, going into 2022, have led to robust demand for apartments, typically in suburban markets that are adjacent to major job centers, as well as for single-family rentals, which have had tremendous growth. The pace of suburban rental demand is going to continue through 2022 and beyond, especially in the high-growth Sun Belt, Southeast markets, where, in some cases, asking rents are now jumping as much as 20 percent.”

Hart went on to explain that “confidence of capital” is a result of these factors, with flow especially directed at Class B and workforce housing.

Nadji posed the question to Hart: “Some of the two-and-a-half to three-percent cap rates that we’re seeing in the marketplace are offset by rent growth that looks to have sustainability. Are you saying it’s safe to assume that the balance between investment decisions, cap rates and rent growth is sustainable?”

“Yes, there is much truth to that,” Hart replied. “It’s difficult for historical apartment investors to believe that cap rates have hit below 4 percent in most major markets,” Hart said. “Not to be glib, but some investors say that the 3 cap is the new 4 cap, and it’s hard to believe that. But the smart money that’s going into the space is betting on growth.”