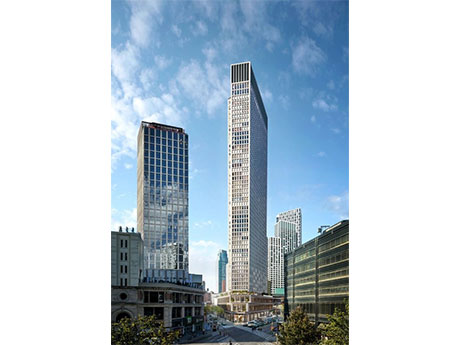 Apollo Commercial Real Estate Finance Inc., which is managed by an affiliate of Apollo Global Management, and Witkoff are developing the property at the cross-section of Fulton Street, Flatbush Avenue Extension, and DeKalb Avenue, next to Brooklyn landmarks such as the Fulton Mall and the Barclays Center.

The mixed-use property will be split between two development sites, with the eastern site located at 565 Fulton St. and the western site at 547-557 Fulton St.

The eastern site will consist of a 51-story mixed-used tower that will feature 561 studio, one- and two-bedroom apartment units utilizing the Affordable New York and Inclusionary Housing programs, as well as approximately 30,000 square feet of common space. Amenities will include a pool with cabanas, dog park, fitness center, half basketball court and multiple resident lounges. The base of the building will feature 17,200 square feet of ground-level retail space.

The western site will consist of approximately 14,000 square feet of retail space next to Albee Square and is poised to attract retail brands and wholesalers looking to establish or strengthen their foothold in Brooklyn.