As Affordability Crisis Deepens, Policies and Market Shift to Assist the Underserved 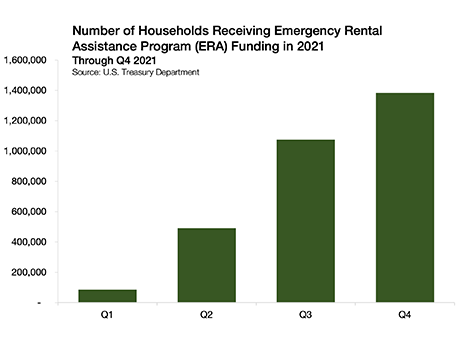 To understand the affordable housing market in spring 2022, one needs to first assess how this sector weathered the pandemic and then assess the current state of housing affordability across the country. In-depth findings on these trends are included in the Arbor Realty Trust-Chandan Economics Affordable Housing Trends Report, from which this article is excerpted.

When it comes to the pandemic response, federal policymakers proved effective at defusing a large-scale increase in homelessness from financially insecure households. The Center for Disease Control and Prevention’s (CDC) eviction moratorium, while unpopular among industry advocates, prevented an estimated 1.6 million evictions, according to an analysis by Eviction Lab.

After the Supreme Court struck down the federal moratorium in August 2021[1], the wave of evictions that many were forecasting did not immediately materialize. Nationally, tracked eviction filings ticked up but remained well below their pre-pandemic averages, according to Eviction Lab.

A key reason why many at-risk renters have remained in their homes is the deployment of funds allocated in the Emergency Rental Assistance Program (ERA) — a funding pool designed to assist households that are unable to pay rent or utilities. The ERA Program was established as part of the Consolidated Appropriations Act of 2021, where it recived $25 billion in funding (ERA1), and then was reinforced with a second round of nearly $22 billion of funding (ERA2) in the American Rescue Plan. Through the fourth quarter of 2021, ERA funding was supporting 1.4 million households, according to the U.S. Treasury Department.[2]

A structural affordability crisis still exists despite expanding public and public-private responses focused on addressing affordable housing initiatives, including federal affordable program expansions in the Consolidated Appropriations Act of 2022 and a growing level of lender partipation.

The National Low Income Housing Coalition estimated that the U.S. had a shortage of 6.8 million affordable rental homes in 2021. According to the U.S. Department of Housing and Urban Development (HUD), rental affordability took a significant hit due to the pandemic. Even as conditions have started to improve over the past year, the pace of rent increases around the country has kept HUD’s Rental Affordability Index well below where it was when  2020 began.

According to a 2021 Pew Research survey, 49 percent of all Americans believe that affordable housing in their local area is a major problem — up from 39 percent in 2018.[3] Further, affordability is a growing priority across all age groups, races, genders, income brackets, education levels, geographies and political affiliations.

With home prices and apartment rents pressing to new highs, it is likely that the affordability crisis will continue to get worse before it gets better. At the same time, 2022 marks a unique moment where policymaking priorities, public sentiment and investment appetites are aligned — providing some hope that this year could be a true turning of the tides.

Wrap Up and Look Ahead

At the federal level, JCHS noted that policy “must not only support expansion of the subsidized stock, but also make it possible for private developers to build affordable units.” Large increases in area median incomes (AMI) across the country should offer some relief to affordable developers, allowing for increased project feasibility on the margin. However, increased public support for the private creation of new affordable housing supply is necessary. According to the National Low Income Housing Council, “without public subsidy, the private market is unable to produce new rental housing affordable” to low-income households as the rents in these units are unable to cover development costs.

Affordable housing policy is growing in both scope and ambition. The enacted 2022 Federal Budget allows for an 8.9 percent increase in HUD funding, and the 2023 budget proposal released March 28 calls for another aggressive expansion (+9.4 percent). The bipartisan Choice in Affordable Housing Act of 2022, which was introduced in the U.S. House of Representatives this past March, offers a mechanism for retaining private landlords in the Housing Choice Voucher program. Additionally, many states are increasingly turning to updates in zoning codes to allow for more naturally occurring affordable housing development.

Policy responses across all levels of government are ramping up as the market need is both substantial and growing. While it is unlikely that any one of these individual policies will be a panacea for affordable housing, they will incrementally contribute to making housing more affordable. Given the importance of affordable housing, one can expect to see this segment of real estate garner more attention as it evolves over the coming years.

[1] While the CDC’s eviction moratorium was lifted, many states still had state-wide moratoria in place in and after August 2021.

[2]The Displayed Number of Households displays include both ERA1 and ERA2 funding.

[3] An additional 36 percent of respondents in 2021 indicate that affordable housing is a minor problem in their local area.