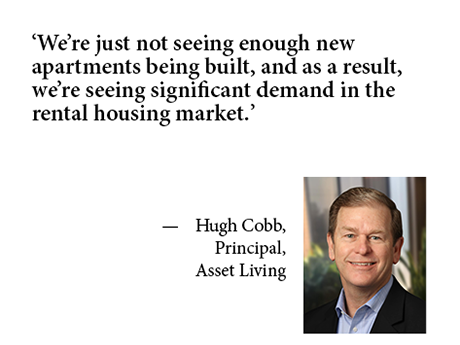 As the commercial real estate market adjusts to how much of an effect higher interest rates will have on investment sales and property values, the rental housing sector continues to witness robust resident demand and rent growth as home ownership has become even more difficult for first-time buyers.

According to a recent report by the National Multifamily Council (NMHC) and the National Apartment Association (NAA), by 2035 the U.S. needs to build 4.3 million new residential rentals to meet housing needs amid shifting demographics, the existing shortage and the loss of 4.7 million affordable units with monthly rental rates of $1,000 or less, the organizations report.

“We’re just not seeing enough new apartments being built, and as a result, we’re seeing significant demand in the rental housing market,” says Hugh Cobb, a principal of Asset Living, one of the nation’s largest property managers of multifamily, affordable, student, active adult, single-family rentals and build-to-rent housing. “Because we’re seeing a decrease in demand in the single-family sales market due to higher mortgage rates, people are staying in apartments longer. And as their families grow, they’re looking for alternative rental housing, such as the build-to-rent space,” says Hugh Cobb.

“Through our proprietary data and other market indicators, many of our clients are seeing a huge opportunity,” said J.C. Reeves, senior vice president of business development at Asset Living. “Paired with our comprehensive suite of services, we’re able to bring our clients award-winning expertise and full-spectrum management for every property class.”

Since 2021, Asset Living has grown by over 60 percent and now manages a portfolio with an estimated real estate value of over $30 billion with more than 175,000 units across the nation.  Just last month, the company announced that it had reached a new milestone of 1,000 properties across more than 40 states nationwide.

Indeed, pending home sales declined 8 percent in June, retreating in all four major U.S. regions, according to the National Association of Realtors. The activity also represented a year-over-year decline of 20 percent.

The current environment has hit Generation Z and other would-be first-time home buyers especially hard. Despite slowing demand for homes, the median home price grew nearly 11 percent in June to $427,696 compared to a year earlier, according to Redfin, an online home sales services site.

At the same time, the cost of capital has increased significantly, largely as a result of the Federal Reserve’s actions to raise the federal funds rate to 2.5 percent so far this year, an increase of 225 basis points. Two additional rate increases are planned for 2022.

A monthly payment on a 30-year mortgage for a home priced at the median value of $389,630 in March was $450 more at the prevailing interest rate of 5.5 percent versus the interest rate of 3 percent that was commonplace prior to the Fed’s moves, according to “Entering the Danger Zone: The Outlook for CRE and Housing,” a report issued by Moody’s Analytics in June. That calculation figured in a 20 percent down payment.

That pain is supporting sound apartment fundamentals. The average multifamily vacancy rate of 4.5 percent in the second quarter represented the lowest rate in five years and a year-over-year decline of 90 basis points, the steepest annual drop in two decades, according to the second quarter preliminary apartment report by Moody’s Analytics CRE. Meanwhile, asking rental rates grew 16.7 percent over the year across the country, the firm reports.

Rental rates have been particularly strong in Phoenix, Dallas, Austin, Orlando and Miami — these were just a few of the markets experiencing in-migration, which is fueling development despite the rising cost of capital, Cobb shares. The secured overnight funding rate (SOFR), a benchmark interest rate, has spiked 228 basis points from virtually zero over the last year. Developers are typically hedging high capital costs with interest rate caps and collars, he adds.

“As we see employment decentralize from everyone having to be in an office every day, it’s allowing folks to live in various locations, which opens up the opportunity for development in less costly cities as people move out of the high-cost-of-living cities,” he explains. “And the cost of construction, and specifically lumber, which increased a lot in 2021, has come down and is continuing to fall.”

Declining prices of lumber and commodities more broadly, along with an inverted yield curve and two quarters of negative GDP growth, typically would portend a slowing economy. Add in a sizable increase in supply, and those conditions could ultimately temper multifamily demand and rent growth.

Construction deliveries of 78,800 units in the second quarter brought the four-quarter total to 307,000 units, the highest amount since the 1980s, according to CBRE’s second quarter multifamily report. The brokerage also notes that with more than 700,000 units under construction, deliveries this year could rival the annual average during the housing boom of the 1970s.

Still, the shortage of rental housing makes new development an imperative, Cobb says. The good news, he adds, is that apartment construction is beginning to occur in communities that once took a “not-in-my-backyard” position toward the product.

“Cities are recognizing that renters bring great economic growth to areas and support the tax base,” he adds. “I think we’re seeing a lot of success in improving housing policies across the nation to allow for apartment growth.”

— By Joe Gose. This article was written in conjunction with Asset Living, a content partner of REBusinessOnline.