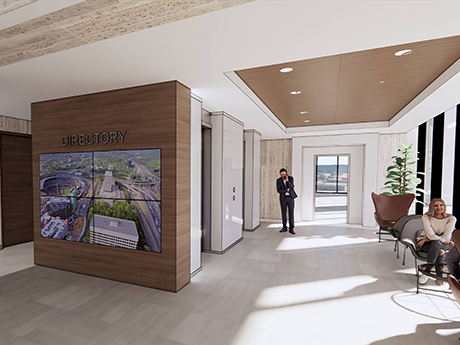 A joint venture of SK Commercial Realty and The Goldenrod Cos. recently unveiled plans for a repositioning of 900 Circle 75 in Atlanta’s Cumberland submarket, with renovations of the 17-story office tower expected to be completed this summer. (Rendering courtesy of Holland Basham Architects)

In many ways, metro Atlanta is a tale of two office markets. Google, Microsoft, Papa John’s, Visa and FanDuel are just some of the heavy hitters that have signed major deals over the last year and a half, fueling leasing activity that is getting closer to pre-pandemic norms. Much of that action has been centered in the Central Business District (CBD), which registered a 68 percent year-over-year increase in leasing volume compared to first-quarter 2021. According to research from CoStar Group, leasing volume for the entire market totaled 3.2 million square feet in the first quarter, which is on par with the 10-year quarterly average.

Midtown, where more than 2 million square feet of new product is under construction and the majority of corporate heavyweights have planted their flag, led all submarkets in leasing activity, with Cushman & Wakefield reporting nearly 314,000 square feet of new leases signed in the first quarter. Midtown’s overall walkability, abundance of high-rise residential units, new office buildings and access to talent from local universities and mass transit have enabled it to become a talent magnet for major employers and one of the nation’s premier submarkets.

However, the vast majority of office tenants in metro Atlanta are small-to-medium-sized businesses, and most of those 3,000- to 10,000-square-foot users are simply not doing deals right now. Historically, those tenants would engage landlords around two years or so before their leases expired, with many opting to renew for continuity and stability. But the combination of ambiguity on what the long-term return to office should look like, along with new market headwinds like rising gas prices, inflation and potential interest rate hikes have created great uncertainty within this sector.

Most small-to-medium-sized tenants coming up for renewal in the next two to three years remain in wait-and-see mode and will likely hold out another 12 to 18 months in hopes that landlords will be more apt to give a better concession package and more favorable terms for reduced footprints.

Though average asking rates recently eclipsed $30 per square foot for the first time in market history, overall rent growth has nearly stalled now. Softening in at least some submarkets is a possibility, but many landlords THAT paid top dollar for their assets will likely feel enough pressure from investors to hold the line and steer tenants toward more generous concessions.

A record-high of more than 6 million square feet of sublease space is also weighing down office owners. The next six months will reveal whether we are heading toward a true tenant’s market.

One key storyline emerging in suburban markets is the “retro renaissance” occurring at many Class B and C buildings. The repositioning for many 1980s- and 1990s-era properties has accelerated over the last several months as many landlords aim to stem the tide of tenants leaving older buildings for newer and flashier projects.

New wellness features, tech tools and access to high-end shops and restaurants are the new “must-haves” for many workers who want to return to the office, but one that’s closer to home and looks different than the one they were in pre-pandemic. Many owners have shown a willingness to splash the cash as more companies begin to scout out new options outside of the CBD, with survival instinct also serving as a healthy motivator.

A joint venture of principals from SK Commercial Realty and The Goldenrod Cos. recently unveiled plans for a $6 million repositioning of 900 Circle 75 in Atlanta’s Cumberland submarket, with renovations on the 17-story office tower expected to be completed this summer. Originally built in 1985 and directly adjacent to The Battery Atlanta, the Circle 75 project reflects broader enthusiasm among landlords operating in “surban-style” areas with access to dynamic amenity bases. Other recent examples include a major repositioning at Campus 244 in Central Perimeter.

A complete redevelopment of the existing office property will include the addition of a timber overbuild, yielding a building with over 380,000 square feet, outdoor terrace space and post-COVID workspace features. The adjoining vacant land will be developed to accommodate a mixed-use, creative live-work campus featuring additional office, hospitality and food/beverage spaces that will be unique in the submarket.

Many tenants are willing to pay a higher price for office space to get the better buildings and newer amenities so they can retain employees, but new construction is often out of reach. Many of these suburban properties are capable of splitting the difference and could command a larger share of the market in the years ahead if the trend becomes widespread.

Metro Atlanta remains one of the nation’s healthier office markets as more people return to their workplaces in greater numbers. Strong market fundamentals, a diverse talent base and the continued inflow of Fortune 500-caliber players announcing corporate expansions bodes well for the future and should help soften any short-term uncertainty.

— By John Poulos, Executive Vice President and Managing Director of Tenant Representation, SK Commercial Realty. This article was originally published in the May 2022 issue of Southeast Real Estate Business.