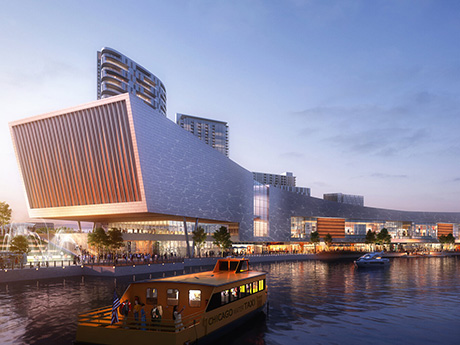 CHICAGO — Chicago Mayor Lori Lightfoot has selected Bally’s Corp. as the preferred company to redevelop a former Chicago Tribune printing plant into a gaming and entertainment destination.  The 30-acre site is located at the intersection of Chicago Avenue and Halstead Street along the Chicago River in the city’s River West neighborhood.

Mayor Lightfoot announced Thursday that Bally’s had won the project over competing bids from Hard Rock International and Rush Street Gaming. State regulators and the Chicago City Council will need to approve the plan before work can begin.

The city’s evaluation report said the Bally’s proposal provides the most economic value to taxpayers, including an upfront payment of $40 million and annual payments to the city totaling $4 million. The project is expected to generate more than $800 million in gaming revenue on an annual basis, a substantial portion of which will support the city’s obligations toward its fire and police union pensions. Bally’s also claims the project will create more than 3,000 annual construction jobs and 3,000 permanent jobs. Bally’s also will not require additional equity financing to fulfill its obligations.

Another important factor in the selection process was the developer’s willingness to hire local and minority-owned companies to build the project. Bally’s committed to 60 percent minority hiring and “will create a jobs program specifically targeting neighborhoods with the highest levels of unemployment and lowest income,” according to the city. Chicago Community Builder’s Collective — a minority-led construction management company — will lead the project.

“Our vision is that Bally’s Chicago will be of the people, by the people and for the people of Chicago,” says Soo Kim, chairman of board of directors for  Bally’s Corp.

Despite winning the project, Bally’s may face an uphill battle for city council approval. Aldermen Brian Hopkins and Brendan Reilly, whose wards border the site, have expressed opposition to the project, according to the Chicago Sun-Times. Additionally, a survey of River North residents recently showed 86 percent are opposed to the development, citing concerns over traffic and crime.

Based in Providence, Rhode Island, Bally’s Corp. is a global casino entertainment company that currently owns and manages 14 casinos across 10 states, along with a horse racetrack in Colorado.