Posted on May 13, 2022 by Kristin Hiller in Development, Michigan, Midwest, Mixed-Use 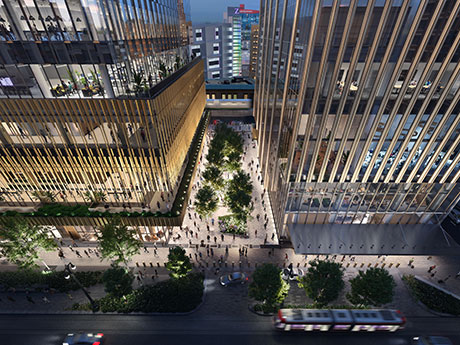 DETROIT — Detroit-based developer Bedrock has revealed new renderings for its development on the site of the former Hudson’s department store in downtown Detroit. The renderings showcase the office, retail, event spaces, public rooftop amenities and public plaza spaces of the 1.5 million-square-foot mixed-use project. The second and third floors of the office portion have been designed to incorporate a 126,000-square-foot events and meeting venue. Overall, the development will include more than 400,000 square feet of office space. Pophouse, a Detroit-based commercial interior design studio, is designing the common areas of the office spaces. Office leasing is underway.

New York-based SHoP Architects and Detroit-based Hamilton Anderson worked with Bedrock on the public spaces and streetscape. Construction on the development has been ongoing since Bedrock broke ground in 2017. In April of this year, the project team completed construction of 220 feet. When it reaches its anticipated height of 685 feet, the building will be the second tallest both in Detroit and the state of Michigan. Bedrock has yet to reveal how many stories the skyscraper will rise. Completion is slated for 2024.