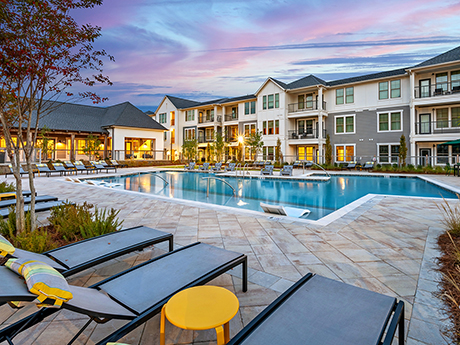 Dobbins Group’s newly delivered Estelle Apartments in Homewood had the fastest lease-up in Alabama’s history, according to Cushman & Wakefield.

The Sun Belt is experiencing unprecedented growth with in-migration trends setting the stage for further expansion and bolstering in-place multifamily product. This includes Birmingham, which has weathered COVID-19 well not only from an employment perspective, but from a rent growth perspective too. The latter is not sustainable without the former, and local capital investments point to more tailwinds.

Birmingham has been on the move, adding 60,000 jobs since April 2020 and becoming the primary driver of economic growth in Alabama. With the influx of new jobs, the city has surpassed its pre-pandemic peak and as a result, the city’s rent growth has outperformed the national average for several years. There was a short period where downtown rents and velocity fell off during the pandemic, but it came back fast and strong.

Riding the tailwinds
One notable example of in-migration, both investment and population wise, was when Landing announced it would be relocating its headquarters from San Francisco to Birmingham. Landing is a tech startup that provides access to a network of fully furnished apartments, and its move to the city is expected to create more than 800 direct, full-time jobs.

The announcement was exciting locally as Birmingham presumably wouldn’t have been an option for a high-growth tech company 10 years ago. The move also highlights the growing venture scene and rising talent pool in the metro area. In fact, the city is home to the University of Alabama at Birmingham (UAB), which employs more than 23,000 faculty and staff and has a $7 billion economic impact on the state of Alabama.

The World Games are also coming to Birmingham this year, which will bring economic growth and be a great opportunity to spotlight the new $200 million Protective Stadium and newly renovated convention center situated in the same submarket of downtown.

The migration of employment and new residents has created many opportunities for Birmingham’s multifamily market. In 2021, Class A transaction volume took a break relative to other asset tranches, whereas large-scale value-add opportunities made headlines across the metro area. 2022 on the other hand is positioned to be a record-setting year from a Class A perspective. It will, however, be important to keep an eye on housing supply versus demand.

Nationally, there has been a lack of supply of housing units stemming from the Global Financial Crisis of 2007 and 2008, thus the market has been playing catchup over the past few years. Lack of supply in the Sun Belt has been greater given the above-average population growth and broader migration to the South. In Birmingham, we’ve seen this front and center through recent transactions.

One example is the new delivery of Estelle Apartments in Homewood, developed by Dobbins Group. The property was listed and completed the fastest lease-up in Alabama’s history. New developments like this along with acquisitions have been fueled by a very liquid market, and lenders have been accommodative and growth-focused in the Birmingham market.

Multifamily also continues to be an unmatched investment vehicle to place dollars due in large part to how liquid the marketplace continues to be. What’s interesting has been watching different investors execute on varying strategies that don’t necessarily align with what they’ve done historically. We’ve seen internal rate of return (IRR) investors chase yield and vice versa.

In practical terms, we’ve experienced capital coming into Birmingham chasing large returns via value-add and those subsequent dollars on the disposition of the Birmingham asset head upstream into core markets (i.e. Charlotte and Atlanta). We’ve also experienced the flip side of this, trading in 5 percent coupon clippers for mid-teen, value-add deals in good submarkets.

Poised to handle headwinds
Something else worth mentioning that we’re all aware of is the rising consumer price index (CPI) and associated actions projected by the Federal Reserve, which directly impact the multifamily market. But the good news is the multifamily sector in Birmingham could not be better positioned for a rising rate environment. Multiple rate hikes signal frothy inflation, and frothy inflation means wage expansion and rent growth.

Sure, higher rates make debt look less attractive on the surface, but the mitigant to rising cost of capital is rent growth. If rent growth moderates, then presumably wage growth has as well. In a slow growth scenario interest rates will once again compress to drive economic activity. The takeaway here is a series of 25 basis-point rate hikes and cuts will not have a prolonged effect to pricing and growth within the multifamily sector. And even if they did, debt funds and life company debt are both mitigants to agency rate hikes, helping keep capital coming to the multifamily marketplace.

All in all, multifamily is a great sector and multifamily in the Sun Belt states is even better due to in-migration, climate and business- and tax-friendly locales. The market looks to be extremely robust in the coming quarters and years.