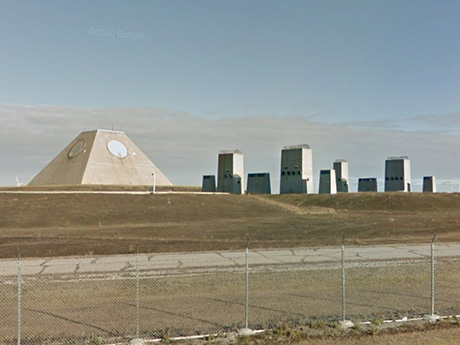 'The Pyramid' is a Cold War-era military installation built in Nekoma in 1970 to protect the nearby Grand Forks Air Force Base from possible attack from Soviet missiles. (Image © 2022 Google)

NEKOMA, N.D. — Bitzero Blockchain Inc. has agreed to acquire the Stanley R. Mickelsen Safeguard Complex (SRMSC) in Nekoma, a tiny city of fewer than 50 residents approximately 130 miles south of Winnipeg, Canada. The Cavalier County Job Development Authority (CCJDA) is selling the property to Bitzero, which plans to redevelop the asset into a highly secure data center. The project costs, including the acquisition, are estimated at $500 million.

Commonly referred to as “The Pyramid,” the SRMSC is a Cold War-era military installation which was built in 1970 to protect the nearby Grand Forks Air Force Base from potential attack from Soviet missiles.

The Pyramid became operational in 1975, featured two different kinds of radar systems and data processing equipment, and controlled 30 anti-ballistic missiles that could be launched in case of attack. The main building features three-foot-thick concrete walls.

The missile site was abandoned after just eight months in operation, when Congress voted to deactivate it. The missiles and equipment were removed, but the concrete structures remain on the landscape.

The CCJDA has owned the site’s tactical area since 2017, but voted unanimously to accept Bitzero’s bid proposal after a presentation from CEO Akbar Shamji.

Bitzero’s bid proposal for the site included a comprehensive “zero carbon displacement” energy strategy, meaning the developer plans to offset the carbon footprint of the data center with the use of renewable energy sources. In addition, Bitzero plans to use waste heat captured from the data center’s servers to heat an on-site greenhouse.

Shamji, alongside strategic investor Kevin O’Leary, have announced that Bitzero had selected North Dakota as its headquarters for the company’s future North American operations, with plans to build 200 megawatts of data centers as well as a graphene battery assembly and distribution hub over the next two to three years.

Based in Vancouver, Canada, Bitzero is an international data center developer focused on cryptocurrency and environmental sustainability.