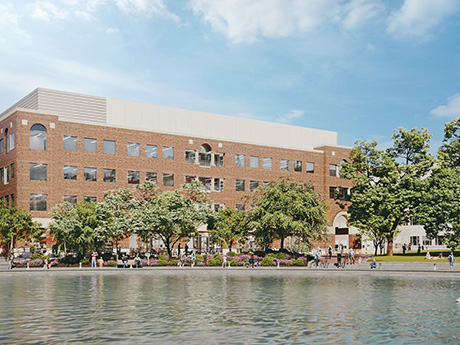 Breakthrough Properties is redeveloping a four-story lab and office building in East Cambridge, roughly two miles from downtown Boston. The property will be rebranded One Canal by Breakthrough.

CAMBRIDGE, MASS. — Breakthrough Properties, a joint venture between Tishman Speyer and Bellco Capital, has begun construction of One Canal by Breakthrough, a life sciences development project in Cambridge, about two miles from downtown Boston.

The property is located on the city’s First Street Corridor overlooking Canal Park and the Charles River in the East Cambridge neighborhood and is adjacent to CambridgeSide – a gated regional mall that is being redeveloped and includes 650,000 square feet of office, life sciences and residential space — and the 4.5-million-square-foot Cambridge Crossing innovation hub.

A timeline for the redevelopment — which aims for Fitwel, WELL and LEED Gold certifications — has not been announced.

East Cambridge, in particular, has a life sciences job vacancy rate of only about 1 percent, according to Breakthrough. Both Harvard University and the Massachusetts Institute of Technology are within two miles of the One Canal project.

Breakthrough Properties announced earlier this year that it has raised $3 billion in direct capital and co-investments to expand a global portfolio of life science properties. The joint venture was formed in 2019 and currently has a pipeline of 4.6 million square feet under development.

Projects are located in Boston; San Diego; Philadelphia; Amsterdam, Netherlands; Oxford, UK; and Cambridge, Massachusetts. In Boston, the company recently delivered The 105 by Breakthrough at 105 West First St., which will serve as CRISPR Therapeutics’ US facility.