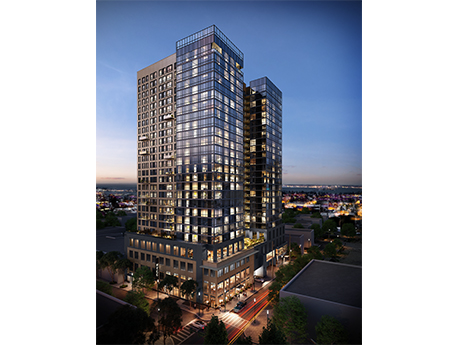 The new multifamily community at 500 Main St. in New Rochelle, New York, will consist of 119 affordable residences and 358 market-rate apartments.

NEW ROCHELLE, N.Y. — BRP Cos., the urban development arm of Goldman Sachs Asset Management, has received $294 million in construction financing for a mixed-income housing project in New Rochelle, a northern suburb of New York City. The development at 500 Main St. in the city’s downtown area will consist of 477 units in one- and two-bedroom formats, 119 of which will be dedicated as affordable housing.

Specifically, 20 units will be reserved for households earning 50 percent or less of the area median income (AMI), while 99 residences will be earmarked for renters earning 60 percent or less of AMI. The remainder of the units will be rented at market rates. The community will also feature 24,000 square feet of amenity space that includes a pool, fitness center, lounge and a rooftop deck. Demolition work is underway with vertical construction set to begin in mid-March, and the first units are expected to be available for occupancy by late 2024.

New York Covenant Church owned the primary acreage on which the project will be constructed and was responsible for engaging BRP Cos. in the development opportunity. In addition, church administrators helped negotiate BRP Cos.’ acquisition of two of the three other parcels that comprise the site and sourced Interfaith Dwellings’ $2.5 million contribution to the financing structure. Lastly, the church will retain ownership of 22,000 square feet of the community and will retain its original address at 500 Main St. That space will house a basketball court and a Christian Academy for students in preschool through fifth grade and will also serve as a venue for Westchester County’s performing arts community.