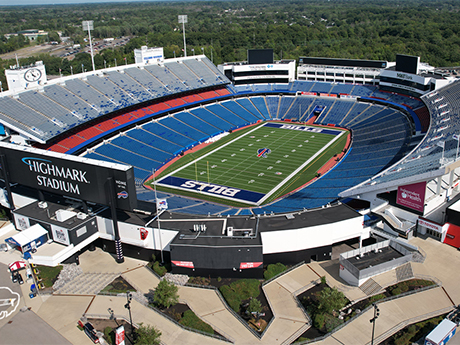 ORCHARD PARK, N.Y. — The Buffalo Bills have reached an agreement with New York State and Erie County for a new $1.4 billion football stadium in Orchard Park, a southeast suburb of Buffalo that is also home to the team’s current arena, Highmark Stadium. According to New York State, the new stadium represents the largest construction project in the history of Western New York.

The National Football League (NFL) and the Bills have committed to providing a combined $550 million for the project, while New York Gov. Kathy Hochul plans to advance a $600 million proposal to the state budget. Erie County will contribute $250 million. NFL owners on Monday approved the deal, which keeps the team in Buffalo for another 30 years.

“While there are a few more yards to go before we cross the goal line, we feel our public-private partnership between New York State, Erie County led by county executive Mark Poloncarz and the NFL will get us there,” say Terry and Kim Pegula, owners of the Buffalo Bills.

The agreement details the construction of a new stadium with a minimum of 60,000 seats in Orchard Park to be designed and constructed by the Bills. The team will begin design of the new stadium immediately, and all parties will begin negotiations on extending the team’s current lease for Highmark Stadium that expires in 2023.

No construction timeline was disclosed for the new stadium, which has not been named yet. Pegula Sports & Entertainment, which owns the Bills, has tapped global architecture firm Populous to lead the design of the project.

In the event the Bills default on the agreement, New York State and Erie County have the right to go to court to enforce non-relocation terms. Additionally, the deal stipulates that the new stadium can be used for civic purposes, such as vaccination delivery and election operations, as well as for emergencies.

The construction project is expected to create 10,000 union jobs. The Bills will negotiate a Project Labor Agreement with the Building and Construction Trades Council of Buffalo, New York and Vicinity, AFL-CIO, on behalf of its affiliated local unions. The deal requires the Bills to agree to a Community Benefits Agreement, which is to be negotiated.

According to New York State, the economic and tax impacts generated from the Bills will support more than 100 percent of the public share of the new stadium cost over the 30-year lease period, as it’s calculated that the team generates $27 million in direct income, sales and use taxes.

Additionally, New York State estimates a halo effect of $385 million annually stemming from fans who attend games from across New York, the United States and Canada who spend money locally that would not otherwise be spent in the region.

“We are pleased with the tremendous progress that has been made on a plan that will provide Bills fans the world-class facility they deserve in western New York,” says Roger Goodell, commissioner of the NFL. “The Pegulas have continued to demonstrate their commitment to Buffalo, a market that has supported the NFL for generations.”