Posted on May 3, 2022 by John Nelson in Development, Hospitality, Mixed-Use, Southeast, Tennessee 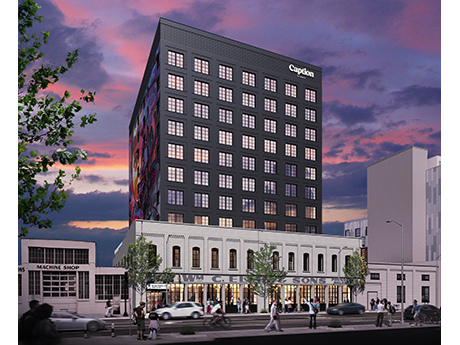 Situated along Memphis’ famous Beale Street and the Mississippi River, the upscale select-service hotel will be integrated into the historic main building of Wm. C Ellis & Sons Ironworks and Machine Shop, which is one of the longest-running businesses in the city. The historic building will house the hotel’s ground and second floors, and a new 136-room tower will rise above and give guests views of the river and Memphis skyline.

Designed by HBG Design, the hotel will feature dual entrances and an all-day, multi-functional lounge space dubbed Talk Shop that will include a coffee shop, cocktail lounge, workstations and sundries market on the inside and a patio and beer garden with fire pits on the outside. Hyatt Hotels Corp. collaborated with Union Square Hospitality Group on the Talk Shop concept.

Hyatt plans to expand the Caption by Hyatt brand to China and Japan in the next few years. According to Commercial Appeal, the Hyatt Centric hotel opened at One Beale last year and work will soon begin on the Grand Hyatt.