Posted on August 22, 2022 by Jeff Shaw in Features, Multifamily 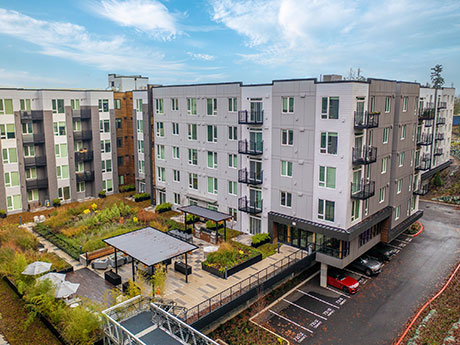 CBRE brokered the $242 million sale of Uplund at Totem Lake, a 409-unit multifamily property constructed in 2021 in Kirkland, Wash. Many new developments are meeting the demand for more space to accommodate remote working in multifamily housing units.

DALLAS — Rent growth and occupancy rates will likely not be as robust in 2022 compared with the prior year, but the U.S. apartment market remains quite healthy, according to a CBRE panel of experts who highlighted the strengths of the sector during an Aug. 8 webinar.

Rent growth registered in the double digits in many active markets in 2021, but monthly rents are still affordable in relation to the average renter’s income, the panelists said. Additionally, developers are building apartment communities with the work-from-home tenant in mind. These two key trends will support a healthy market throughout the remainder of 2022, according to CBRE.

The panelists concurred that while consumer confidence is low, other trends, such as wage growth, indicate apartment demand will remain steady. This will especially be true if developers continue to meet demands to accommodate hybrid and remote workers by incorporating workspaces into units and common areas of the apartment communities they’re building.

“Housing demand in the U.S. remains exceptionally high,” said Vance. “It has brought occupancy rates to historic levels. So, it’s not surprising that we’re seeing exceptional rent growth as well.”

Despite rising rents, the average renter is not yet cost-burdened, according to CBRE, which also reports most tenants inprofessionally managed apartment properties are paying around 27 percent of their income toward rent. This is less than the 30 percent threshold typically considered to be cost-burdened, meaning that there is room for additional rent growth, Vance explained. But that data doesn’t apply to all renters.

“I should probably acknowledge, too, that lower-income households, especially in high-cost cities, face much more significant affordability issues.”

Notably, vacancy rates did increase in the second quarter. According to RealPage Market Analytics, the vacancy rate for the second quarter of 2022 was 3.2 percent, compared with 2.5 percent in the first quarter. Vance attributes this to developers adding supply to the pipeline during a time of unseasonably weak demand last quarter. This is in combination with failing consumer confidence and slowdown in demand in 2022 after the record year for housing demand that was 2021.

“If I were going to sum this up for you in a sentence,” Vance concluded, “it’s that the U.S. multifamily sector will continue performing above trend for a while longer, but that vacancy rates will continue their drift back up toward normal levels this year and next. We can expect rent growth to decelerate as a result.”

The presenters also discussed the rise of hybrid and remote work models and the impact that shift may have on downtown and suburban multifamily markets. According to Vance, downtowns and coastal cities with higher costs of living suffered the negative impacts of population movement into the suburbs at the beginning of the pandemic, but renters have recently begun to move back into urban, downtown apartments.

Developers are approaching the demand for home-based workspace in two ways, according to Vance.

First, developers are increasing the average size of today’s new units. The average size of units delivered this year are 9.6 percent larger than those built in the 10 years preceding the COVID-19 pandemic. Second, developers are incorporating workspaces into common areas as a community amenity, allowing tenants to leave their apartments while still working from their homes.

“The world is a connected place, and what we’re learning is that the changes that we’re seeing in consumer behavior are really impacting all asset classes,” said Whelan. “And that is most evident in multifamily.”