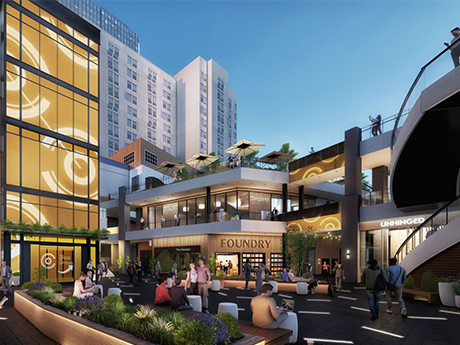 CBRE plans to begin a renovation project at the 302,324-square-foot EpiCentre development, which has been renamed Queen City Quarter after Charlotte’s nickname 'The Queen City.'

CHARLOTTE, N.C. — CBRE has announced plans to lead the marketing, property management and renovations at the 302,324-square-foot EpiCentre mixed-use development in Uptown Charlotte, which opened in 2008 before CBRE took it out of receivership in 2021. CBRE plans to begin a renovation project at the development, which has been renamed Queen City Quarter after Charlotte’s nickname “The Queen City.” Streetsense, a global urban design and placemaking agency, has been engaged to shape the physical and branding elements of the property. Significant repairs to the courtyard, parking garage, patios and roof are underway and expected to be complete by year-end.

Queen City Quarter is situated on College Street (between Trade and Fourth streets) and features a Lynx light-rail station on the second level. The property is within walking distance to Spectrum Center (home of the Charlotte Hornets), Bank of America Stadium (home of the Carolina Panthers) and the Charlotte Convention Center.