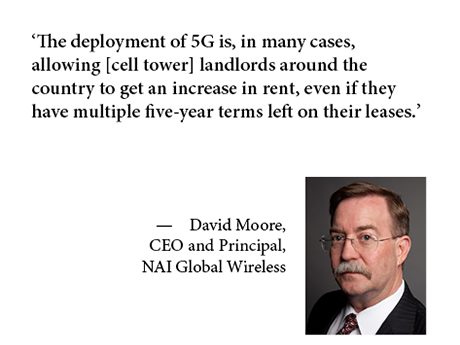 For decades, Moore explains, property owners have been willing to sign less-than-ideal agreements with carriers and tower companies. Over the years, landlords, thinking that just because these cell tower sites are small and out of the way or because they did not want to turn down “free money,” were willing to sign disadvantageous lease agreements.

Landlords often do not understand the impact of signing a lease agreement with a potential term of 30 years (made up of five-year terms), especially when tenants might use leases to constrain certain real estate negotiations (including rights like tenant approval for buyers, rights of first refusal and noncompetition clauses). In many cases, tenants have the unilateral right to terminate their lease without notice, a right about which landlords frequently aren’t aware.

Rent escalations, terms and conditions, inflation and more need to be factored into any lease — new or old, especially as the market for cell site buyouts reaches an unprecedented fever pitch in the investment world.

What Makes for a Good Cell Tower Site?

In broad strokes, radio frequency engineers employed by carriers determine the company’s needs based on how the carrier’s system is developed and the areas the carrier needs to boost or infill to create continuity of service on a national platform. In most cases, cell towers follow major, existing infrastructure, especially highways and freeways.

Today, new cell towers are being built for a handful of reasons: in urban areas, some cell towers are being relocated; in secondary markets, new sites are filling in the grid of coverage; and, finally, the biggest push driving new cell towers is to bring coverage on a larger scale to rural areas. Federal mandates and widespread dependence on cell service and Wi-Fi connectivity have encouraged this focus on new rural towers. The bulk of these rural builds are occurring in states (including Oregon, Montana, Idaho, Wyoming and the Dakotas) with limited population bases but substantial freeway infrastructure.

Moore elaborates, “Carriers are trying to keep up with consumer demand.” Customers using the towers need increasing connectivity and overall speed. The need for cell coverage has grown substantially (and is unlikely to ever contract), and it has become integrated into lifesaving and convenient systems alike. The availability of coverage is driving innovations in everything from autonomous vehicles to remote, Internet of Things (IoT) devices developed for special purposes, such as smoke sensors to detect forest fires.

Leasing space to cell tower companies can bring steady rent and add value without being labor intensive. Traditionally, all the infrastructure costs are paid for by either the tower company or the carrier. Architectural engineering, entitlements, physical structures, equipment maintenance and any other related cost are 100 percent paid by the tower company or carrier. Typically, the initial term for these leases is five years, with multiple five-year renewal options thereafter.

The amount of space needed by the tenant is relatively small (approximately 500 square feet in urban areas, where space is most limited) and the process helps leverage the overall asset value — allowing the landlord to remain relatively uninvolved and receive a dependable rent. Often the largest burden to a landlord is providing 24/7 access for tenant vehicles, equipment and personnel. Also, all carriers require cell tower landlords to carry some form of liability insurance.

Cellular carriers drive new lease sites in the cell tower business. Cellular companies and other wireless users are “always going to look to co-locate on a tower that’s existing in a market if it meets the radio frequency engineering requirements. The municipality will always make it easier to entitle on an existing infrastructure than allow new ones to be built because the municipality would rather have them clustered than proliferating,” explains Moore.

These evaluations let the landlord know if or when they’ll have the right to renegotiate lease agreements to bring the agreement up to current market conditions or to be forewarned if their agreement is over market — meaning they may face economic pushback from the carrier or the tower company at the time of renewal.

Suggestions for lease renewals can help landlords tie escalations in rent to metrics that won’t be quickly outpaced by inflation.

Brandhagen says landlords need to know “What is the market rent? What is a typical market escalator? Lease renewals are the perfect opportunity to open up that lease agreement and remove disingenuous clauses or other kinds of clauses that really don’t make any sense. Any rights the tenant has to approve anything — for example, rights of first refusal or limitations on certain terms and condition — can be stripped out. We can streamline that lease agreement so it’s a little more balanced. It’s your chance investigate and clean up the terms, to make the leases less tenant oriented.”

And now is a good time for all parties to review these leases, 5G is implemented nationwide. Tenants are demanding landlords agree to expanded use and upgraded use clauses as a tradeoff — carriers are hoping to avoid paying more as technology expands by leaps and bounds.

“The deployment of 5G is, in many cases, allowing landlords around the country to get an increase in rent, even if they have multiple five-year terms left on their leases,” says Moore.

The same approach to getting ahead of technologically induced changes may be particularly pertinent as Dish Network (hoping to become a fourth and powerful player in the United States’ wireless carrier game) attempts to transform building sites with equipment with drastically smaller footprints.

Cell site buyouts allow buyers to aggregate a large number of lease agreements on a national platform. Buyers acquire the institutional quality tenants for their cash flow, explains Moore. “For large balance sheets, it’s a very solid investment vehicle, even though it’s a personal property income stream. For individual real estate investors, it would be unsound to buy these assets individually. But if you’re aggregating them on a large scale and they have a critical mass, the risk of decommissioning a site here or there (which happens every year), is offset by the yield and the growth of your portfolio.”

Moore notes, “It’s a pretty robust platform for large-scale investors. The majority of the people that do the buyouts now have multibillion dollar portfolios, and they take a small percentage of that portfolio for these high-risk/high-yield agreements.” Buyers receive a slight discount because the risk is a little higher (because once cell towers are decommissioned, they don’t come back).

The market is currently extremely heated. “The prices that these buyers are paying today is almost double what they were paying five or six years ago, and we’re at the absolute top of the market,” says Moore. “It’s easy to get 19 to 21 times annual income on these assets. That is absolutely unheard of. Back six or seven years ago, they were 12 to 15 times the annual income amounts.”

His advice is that people should “take advantage of it even if they’re going to pay the taxes, because they’re never going to get a better price.”