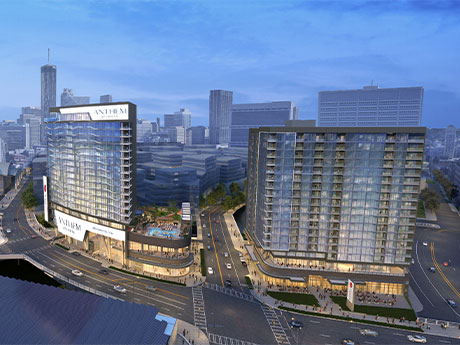 The two new towers include a hotel called Anthem and an as-yet-unnamed apartment building.

ATLANTA — Centennial Yards Co. has broken ground on two high-rise towers in downtown Atlanta as the next phase of the development plan that will turn the city’s Gulch district into a $5 billion multi-phase area known as Centennial Yards.

One tower will be an 18-story, full-service, boutique hotel called Anthem, which will feature guest rooms averaging over 400 square feet, a pool deck with a bar and event room, an 8,000-square-foot ballroom and a rooftop restaurant and bar. The second tower, also rising 18 stories, will be an apartment building.

The multifamily community will offer studio, one-, two- and three-bedroom floor plans and include features such a pool with an event lawn and grilling stations, on-site co-working space, a dog run, a fitness center and multiple lounges for residents. Individual units will feature interior design by Atlanta-based design firm TVS Architecture + Design.

The two towers are adjacent to Mercedes-Benz Stadium and State Farm Arena, the sports venues that are home to the NBA’s Atlanta Hawks, NFL’s Atlanta Falcons and MLS’ Atlanta United.

Atlanta-based architecture firm Goode Van Slyke Architects designed both buildings. The towers are slated for completion in 2025, ahead of the recently announced 2026 FIFA World Cup games to be held in Atlanta.

Thanks to its location in the heart of downtown, the entire project is near multiple MARTA heavy rail stations. It is also approximately one mile from major downtown Atlanta attractions such as the Georgia Aquarium, the World of Coca-Cola, the Children’s Museum of Atlanta, the National Center for Civil and Human Rights, the Georgia World Congress Center and Centennial Olympic Park.

“With the development of Centennial Yards, we have an opportunity to further revitalize downtown while bridging the gap between the east and west sides of our city,” said Atlanta Mayor Andre Dickens at the groundbreaking ceremony. “This project is uniquely Atlanta — bringing the public, private and nonprofit sectors together to dream big and execute a plan in a thoughtful and deliberate manner.”

Centennial Yards Co., a partnership between an affiliate of CIM Group and a group led by Tony Ressler, will serve as master developer throughout the project. CIM Group bought the site in 2018 for $115 million and has already completed several projects.