Posted on May 5, 2022 by Taylor Williams in Development, Mixed-Use, Texas, Top Stories 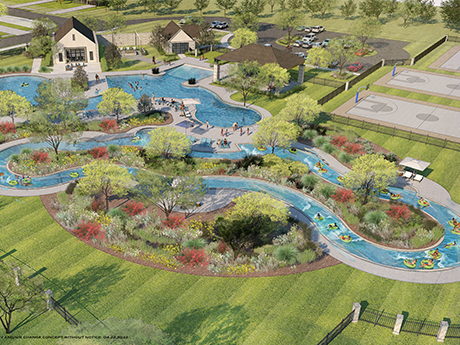 Pictured is a rendering of one of the amenity centers within a subdivision of Legacy Hills. In addition to 7,000 single-family homes, the 3,200-acre development in Celina will house more than 4,000 multifamily units, 100 acres of commercial space and multiple other outdoor features and uses.

CELINA, TEXAS — Centurion American Development Group has broken ground on Legacy Hills, a mixed-use, master-planned development that will span approximately 3,200 acres in the North Texas city of Celina. The site is located at the corner of Legacy Drive and Celina Parkway, about 40 miles north of downtown Dallas.

Legacy Hills will feature more than 10,000 residential units, with current plans calling for about 7,000 single-family homes and 4,100 multifamily units. The commercial component will encompass 100 acres and will include retail, restaurant and entertainment space, though other uses within that portion of the project have not yet been announced.

In addition, Centurion American has earmarked two 12-acre parcels as future sites of schools within the Celina Independent School District, as well as two seven-acre tracts that will house fire and police stations.

A network of hiking and biking trails will link various pieces of the development, and Centurion has allocated 27 acres for the City of Celina to develop into a sports park. Lastly, a championship golf course, complete with a driving range, putting green and clubhouse, will run through the center of the site.

The single-family homes will be spread across seven subdivisions, each of which will have its own amenity center with a community pool and play areas. Each subdivision will be constructed by a different builder, including marquee industry companies like Lennar and D.R. Horton.

“We’re planning for Legacy Hills to become the most sought-after address in Collin County,” says Mehrdad Moayedi, CEO of Centurion American. “With an array of onsite amenities, a prime location and ample open space, this development will be a true lifestyle experience for future residents.”

The locally based developer, which has partnered with Trez Capital on the project, originally announced Legacy Hills in August 2021. Centurion American, founded in 1990, is leading several other major mixed-use projects in the Dallas-Fort Worth area, including the redevelopment of the Collin County Mall and City Point, a 52-acre project in North Richland Hills.