Posted on August 30, 2022 by Jeff Shaw in Features, Multifamily 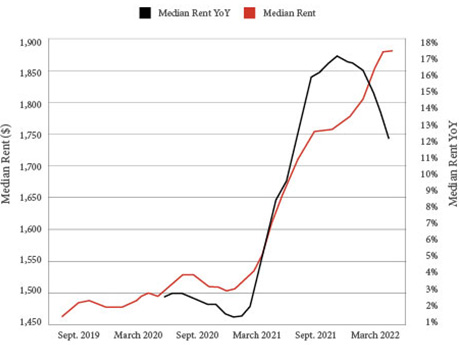 Median national rent remained at a record high for the 17th month in a row in July, with median rent reaching $1,879. (Source: Realtor.com)

SANTA CLARA, CALIF. — During the pandemic, moving to the suburbs could save apartment renters more than $600 per month. Today, that difference is only $100. Regardless of location, rents everywhere reached an all-time high in July.

Avail, a subsidiary of Realtor.com, recently released its Quarterly Landlord and Renter Survey, which collected and analyzed rental data from about 50 metros and suburbs. The study found that median asking rents in cities were $1,928 per month in July, while suburban rents averaged $1,821.

That’s a stark difference from just a few years ago, when lower rents lured many remote workers to the suburbs to save money during the pandemic. A report published by Yield PRO in September 2020 estimated median urban asking rents to be $1,955 per month while suburban apartments were a much better bargain at an average of $1,349.

Nationally, asking rents are about 23 percent higher today than they were in July 2020, according to Realtor.com, which also claims the latest across-the-board average of $1,879 is the highest rate in the past 17 months.

Rent growth in the double digits is historically significant, but landlords are expected to lay off rent hikes in coming months while tenants grapple with inflation.

Conversely, per the report, rent is growing slowest in Minneapolis, which showed an increase of about 3 percent, followed by: Sacramento, California (3 percent); Riverside, California (4 percent); Phoenix (5 percent); and Buffalo, New York (6 percent).

These record high rents — 12 percent higher than 2021 — amid 8.5 percent inflation and just 5 percent wage growth are a source of concern for renters in both urban and suburban areas.

“Whether in a downtown area or suburb, staying put or making a change, renters are stuck between a rock and a hard place when it comes to affordability,” said Danielle Hale, chief economist at Realtor.com.

“Compared to three years ago when rental price premiums were typically concentrated in urban hubs, renting is now nearly as expensive in the suburbs, where the rise in remote work has driven a surge in demand.

“At the same time, the days of smaller premiums for downtown rentals are numbered, as a return to in-office work and city life is sparking a relative uptick in urban rent growth.”

An Avail survey conducted in July showed that 60 percent of respondents felt that the increasing cost of rent and other household expenses are causing financial strain for their households. A majority — 57 percent — reported that their rent has increased since moving into their current residence. The survey was authored by Avail, a company that provides services to landlords, such as rental listing capabilities and marketing, tenant applications and screenings, digital leases and online payment portals. Realtor.com acquired Avail in 2020.

“Put simply, renters are feeling it everywhere,” said Hale, “but there may be some relief ahead. Survey findings suggest that landlords are adjusting their approaches to renters’ tightening budgets, while July data show rent growth is leveling off at a relatively cooler pace than in 2021.”

Indeed, the report does indicate an oncoming slowdown in rent growth. Median national rent grew by just $3 from June 2022 into July, which is the smallest month-to-month growth in 2022 thus far, and the lowest year-over-year rent growth since August of last year. Findings from Avail’s July survey of landlords indicates that while just more than 72 percent of landlords reported plans to raise rents within the next year, the rate has held steady over the previous quarter, after having jumped substantially from January (65 percent) to April (72 percent).