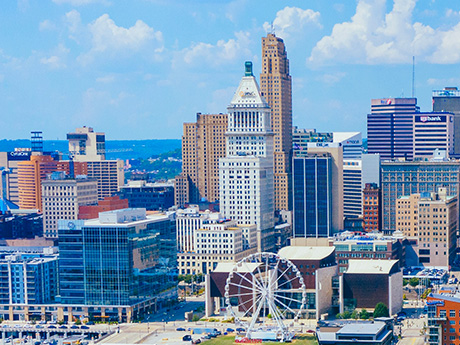 Union Central Tower in downtown Cincinnati, seen at center, was the fifth-largest building in the world at the time of its completion in 1913. The redevelopment project will turn the 31-story building into a 281-unit apartment building.

CINCINNATI — City Club Apartments has broken ground on the redevelopment of Union Central Tower, a historic skyscraper in downtown Cincinnati. Plans call for 281 luxury apartments in a mix of unfurnished long-term rentals and furnished short-term rentals, as well as ground-floor commercial space. The total cost of the redevelopment is estimated to be $90 million.

Union Central Tower, most recently known as PNC Tower, was built in 1913 and at 31 stories was the fifth-tallest building in the world upon completion, as well as the second-tallest outside of New York City. The property was designed by legendary turn-of-the-century Cincinnati architecture firms Garber & Woodward and Cass Gilbert.

“Investments like the Union Central project are a key part of attracting the young, diverse talent that our city needs in order to thrive,” says Cincinnati Mayor Aftab Pureval.

“City Club Apartments Union Central will combine the service, amenities and international design of a boutique hotel you might find in Paris, London or New York with engaging, connected and walkable urban apartment living,” says Jonathan Holtzman, founder and CEO of City Club Apartments. “Our residents will have direct access to the city’s leading employers, public transportation, arts and culture, parks and trails, sporting venues, retail, restaurants and entertainment.” 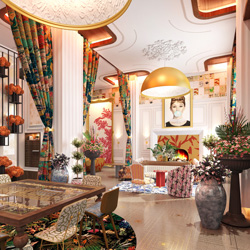 A rendering shows the boutique lobby, library and lounge planned for the first floor of the redeveloped Union Central Tower building in downtown Cincinnati.

Apartments will range from 400 to 1,800 square feet, including studios, one-bedroom, two-bedroom, three-bedroom and penthouse options. Of the total units, 10 percent will be designated as affordable.

In addition to being green building certified (NGBS), technology certified (WiredScore) and wellness certified (Fitwel), the community will be Clean Rated, which includes a 114-point checklist on social distancing, intensive cleaning methods and medical health reporting.

Preleasing is scheduled to begin during first-quarter 2023 for first occupancy beginning in third-quarter 2023.

Commercial uses are expected to include office space, a salon/spa, a bank, market, Shire’s Café restaurant on the first floor and The View at Shires Garden, a 10th-floor restaurant.

Founded in 1919 and headquartered in Michigan, City Club Apartments is an owner, developer and manager of apartment, furnished short-term and penthouse mixed-use communities with a portfolio of approximately 8,500 apartments in 30 communities.