Collaboration, Creativity and Coffee: Reasons Why the Office Still Matters 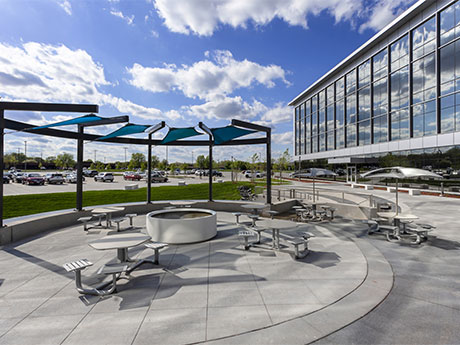 Pictured is the outdoor dining area at the Westfield Campus, a 180,000-square-foot office property in West Des Moines.

It’s no secret that the past couple of years have been dramatically different for us all. We’ve had to adjust to new routines, new practices and new ways of getting work done. Some of these new things will be here to stay while others have already receded into memory. No matter the amount of change though, one thing remains the same. That’s the need for human connections and relationships. And, ultimately, that’s what physical office space provides.

It seems many organizations are starting to understand just how valuable this connection truly is. Across various submarkets within the Des Moines metro area, companies large and small are returning to in-person work. And it’s not just existing customers returning to their spaces.

There has been a marked uptick in office leasing activity in locations ranging from downtown to the western suburbs. From advertising agencies to accounting firms and more, the vacancy rate across the entirety of central Iowa is beginning to be chipped away.

Why are so many companies across a wide variety of industries heading back to the office? Well, like we mentioned earlier, there’s a sense of connection and an ability to be creative that’s simply difficult to replicate in isolation. Many people have anecdotally felt this through things like “Zoom fatigue.” However, science now backs up those feelings.

In a recent study published in Nature, researchers studied the impact of collaborating via technology like Zoom or Microsoft Teams. In the study, they looked at the creative impact of work done virtually as opposed to work done in-person.

Collaborators who were meeting in-person engaged not only with each other at a higher level, but also with the area around them. The physical space they were in ended up playing a role in the creative output of the project.

This impact by the physical space is something we’ve been anecdotally talking up for years, but now there’s actual science to back up the feelings of those who prefer spending at least some time in a physical office setting. As leaders across a wide variety of industries have discussed how to best have their business utilize physical workspace, this is something we’ve really been emphasizing. Not all businesses may be in a creative industry like design or advertising, but creativity still plays a large role in helping all businesses succeed.

Another point we’ve been emphasizing to decision makers in metro Des Moines is the importance of crafting and maintaining an organization’s culture. It’s very difficult for new employees to begin a role and feel integrated with a team when their only interaction is via phone calls or video chats.

The value of a physical workspace is that when people are together, an organizational culture can continue to grow and thrive for all employees, not only the ones who are already established in their roles.

So, what does the future look like for office space in the Des Moines market? Well, it’s far more positive than at any previous time over the past two years. Many companies are returning their employees to the office and far more importantly, many employees are keen to return, having an understanding of what makes in-person collaboration so valuable.

Many organizations will continue with some form of hybrid working for the foreseeable future, but that arrangement at least offers a degree of collaboration and a respite from the isolation many employees experience when working remotely.

We can’t predict what the future will bring, but as we see it today, the office absolutely still matters.