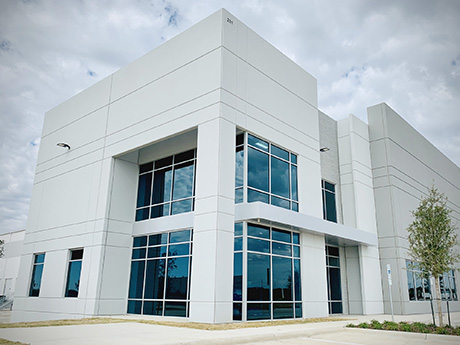 CommercialEdge reports that Kansas City's industrial market has grown by 15 percent in the past five years. Shown is KCI 29 Logistics Park, Hunt Midwest's project that will support up to 18 million square feet of Class A logistics and manufacturing space adjacent to Kansas City International Airport.

SANTA BARBARA, CALIF. — The national average for in-place industrial rents across the top 30 U.S. markets reached $6.45 per square foot in February, a 4.4 percent year-over-year increase according to research from CommercialEdge, a product of Yardi Systems. The Santa Barbara-based firm found that the average effective rental rates signed over the same interval was $7.35 per square foot, 90 cents higher than the national average for in-place leases, a nearly 14 percent swing.

Southern California markets led the nation in rent expansion, largely due to intense activity in the Ports of Los Angeles and Long Beach. Orange County recorded the most significant 12-month change with a 7 percent hike, reaching $11.65 per square foot. Los Angeles (6.7 percent) and the Inland Empire (6.5 percent) rounded out the top three markets nationally.

On the other end of the spectrum, markets that have higher availability of developable land recorded weaker rent growth in the last 12 months. Newly delivered stock in these markets is helping developers meet demand, while also elevating vacancy levels. Across the top 30 U.S. markets, rent growth was slowest in Charlotte (1.1 percent), Houston (1.7 percent) and Indianapolis (2.3. percent).

Record supply
The first two months of the year saw 44.6 million square feet of new supply delivered. Additionally, lags in data collection on some new completions will mean that this number will increase as more completions are documented and accessible to CommercialEdge. The research outlet expects the first quarter of this year to surpass the 77.3 million square feet delivered in the first quarter of 2021, which was the start of a record-setting year.

While markets near ports are in a constant battle to find affordable land to develop, Midwestern markets are adding space at a robust pace to meet demand, limiting rent growth even in markets with low vacancy rates.

For example, Kansas City added 38 million square feet of new supply over the last five years, increasing stock by more than 15 percent over that time. The robust pipeline helps explain why rent growth is in the middle of the pack at 3 percent and new leases signed over the last 12 months have not come at a premium, despite a low vacancy rate of 3.3 percent. That trend will likely continue, with 13.4 million square feet under construction and 14.3 million square feet in the planning stages.

CommercialEdge data shows that industrial supply levels will only grow in the coming years. Even though historic levels of new supply have been delivered recently, it has not been enough to meet demand. Currently, the markets covered by CommercialEdge have 592.5 million square feet of space under construction, an increase of more than 90 million (or 18 percent) in the last six months, and an additional 625.5 million square feet are in the planning stages.

Yardi Matrix’s industrial supply forecast — which utilizes historical trends to iterate through the supply pipeline — predicts that supply levels will continue to be elevated for the next five years, with more than 400 million square feet delivering from 2022 through 2027.

The monthly CommercialEdge national industrial real estate report considers data recorded throughout the course of 12 months and tracks top U.S. industrial markets with a focus on average rents; vacancies (including subleases but excluding owner-occupied properties); deals closed; pipeline yield; and forecasts, as well as the economic indicators most relevant to the performance of the industrial sector.