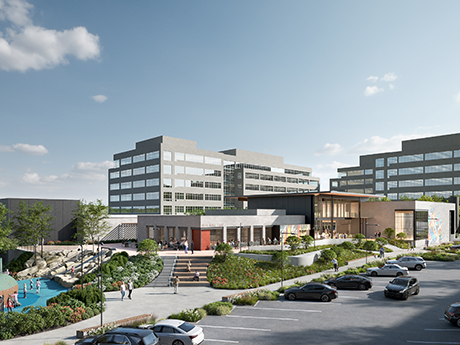 Pictured is a rendering of some of the restaurant and common spaces at The District in Berkeley Heights. The project will add 328 apartments and 190,000 square feet of retail, restaurant and entertainment space to the local supply.

BERKELEY HEIGHTS, N.J. — Connell Co. has unveiled plans for expansion at The Park, a 185-acre mixed-use campus in the Northern New Jersey community of Berkeley Heights. The latest phase of The Park will be known as The District and will comprise five new buildings that will house 328 multifamily units and 190,000 square feet of retail, restaurant and entertainment space. The two multifamily buildings will total 179 and 149 units and will both feature a variety of indoor and outdoor amenities. The first of the three retail buildings will encompass 81,715 square feet and will be fully dedicated to entertainment. End users within this structure, which will also house a covered garden and event space, will include a brewery, Mexican restaurant, Italian steakhouse and a duckpin bowling concept. The other retail buildings will total 30,515 and 25,755 square feet. The District will also feature various pocket parks and open green spaces. Completion is slated for a 2025.