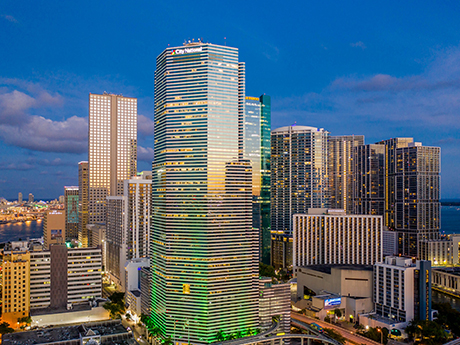 Miami Tower was 67 percent occupied at the time of sale, according to Cushman & Wakefield.

The seller is USPO Miami LLC, an entity established by Sumitomo Corp. of America, which purchased Miami Tower in 2016. The sales price was not disclosed, but South Florida Business Journal reports the tower traded for $163.5 million, a significant decrease from the $220 million price tag Sumitomo paid six years ago.

“This trophy asset has been the centerpiece of the Miami skyline for over 30 years,” says Brett Reese, who oversees acquisitions and investments for CP Group in South Florida, Texas and Colorado. “Our repositioning campaign will generate new value at this storied project, appealing to the major companies relocating their operations to Florida and the rest of the Southeast.”

Founded in 1986 as Crocker Partners, CP Group is currently Florida’s largest office landlord and Atlanta’s second-largest office landlord, following its acquisition of Bank of America Plaza earlier this year. Headquartered in Boca Raton, Fla., the firm has a corporate office in Atlanta and regional offices in Denver, Miami, Jacksonville, Dallas and Washington, D.C.