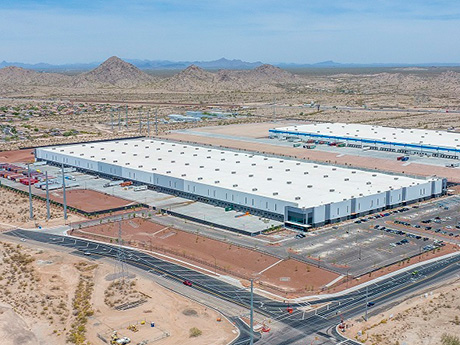 Funko, a toy company best known for its pop culture figurines, bobbleheads and other collectibles, fully occupies the 10 West property, signing the lease in advance of completion in 2021. The 860,602-square-foot asset serves as the company’s U.S. distribution center.

“We are firm believers that the Buckeye industrial submarket will continue to mature and attract industry-leading organizations as it establishes its place among sought-after West Coast industrial development hubs,” says Brandon Delf, principal and co-chief investment officer with Cohen Asset Management.

Simultaneously with the sale announcement, Creation unveiled plans for a new industrial development in Buckeye. Named Ten85, the proposal calls for 4.2 million square feet of speculative space on a 270-acre parcel.

The planned Ten85 logistics park will include four buildings ranging in size from 650,000 to 1.2 million square feet and will cater to a variety of uses. Creation is in the process of acquiring the site with the help of Brent Moser of Lee & Associates Arizona, with plans to close the sale by the end of the month. Further details regarding the start of construction and estimated completion were not yet released. JLL has been hired to manage the leasing.

The building features 30,000 square feet of office space and sits on a 72-acre site less than four miles from 10 West. Ten85 is a 4.2 million-square-foot industrial park that Creation plans to build in Buckeye, Arizona, on a 270-acre parcel.

“The fact that leading companies like KORE Power, Five Below, Funko and Ross Stores Inc. are all establishing their operations in Buckeye is a huge testament not only to the city’s premier gateway location between Arizona, California and the Western United States, but also the immediate availability of labor, land and access to the supply chain,” says Grant Kingdon, vice president of transactions at Creation. “Buckeye is the nation’s second-fastest-growing city and it’s apparent that a tidal wave of opportunity is starting to form. The area has really become a reliever for the land-constrained Inland Empire.”

Earlier this month, the city of Buckeye announced the redesignation of approximately 4,000 acres of vacant and agricultural land with the hope of bringing more industrial uses to the area. In recent years, Buckeye has made strides in establishing State Route 85 as one of the Phoenix metro’s largest industrial corridors, resulting in significant job growth.