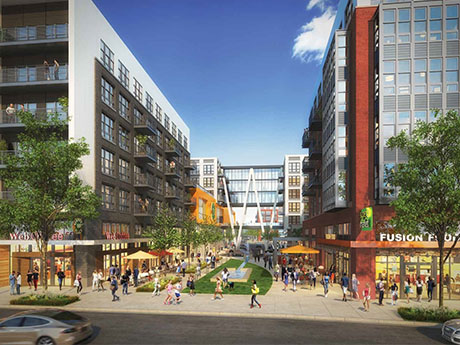 Across the country, investors are facing some difficult hurdles. Rising interest rates, impending economic recession and rising construction costs are making it increasingly difficult for proposed deals to penicl out for investors. These issues, coupled with a swath of non-performing loans that are nearing maturity, have been the first indications we have seen of a bear market in the real estate world, and there are no signs of improvement in the near future.

In times of uncertainty, we often see investors adhere to a conservative approach to investment, which normally means increased focus on core markets and assets.

One area of focus in which investors have remained bullish is Washington, D.C.’s multifamily market as it continues to thrive, despite turmoil in the larger U.S. economy. Developers broke ground on new multifamily product in excess of 4,000 units for the fourth consecutive quarter, a first for the D.C. market.

Multifamily sales volume has not quite matched the bull market of 2021; however, sales in 2022 still outpace most years in the metro’s history. Whether it’s construction on ground-up development of multifamily product, or the purchase of existing multifamily product, the D.C market has not shown any signs of slowing down.

For one, the D.C. metro market is seemingly insulated to the effects of economic downturn. This is mostly a result the federal government’s pronounced presence in the region, as it employs more than 10 percent of the area’s population.

Another main driving factor is the active presence of various Fortune 500 companies, which is a direct result of the high retention of the area’s well educated labor force. These two factors in tandem not only support positive population retention and growth, but also the ability to pay for a higher standard of living.

Some might think that, with over 36,000 units under construction pending delivery, the demand for multifamily rentals would slow down. Yet, a cursory review of the data would speak to the opposite.

Absorption is expected to surpass deliveries this year, meaning that demand is actually outpacing supply of new multifamily product in the D.C. area. With absorption outpacing the market average by over 2,000 units over a one-year period, the demand for multifamily rentals remains very strong.

And owners have been able to steadily increase rents an average of 4.2 percent, a nearly 1.5 percent increase over the five-year average. This is spurred in part by the Department of Consumer and Regulatory Affair’s allowable rent increase on rent-controlled units reaching 6.2 percent for 2022, which is nominally higher than previous years. Regardless of the conditions, the result is the same, and investors across the country are taking note.

With these factors present and with increasing interest in the metro D.C. market, it is important to understand the players that have already staked their claim. Outside of the private capital and middle market space that has typically been driven by local developers and investors, larger institutional firms from areas such as New York and Miami have made significant purchases in the metro area as well. A recent example is Cortland’s purchase of a property in downtown Arlington at a whopping $735,000 per unit.

As more institutional firms enter the market, competition for both existing multifamily assets and land will increase substantially. This will result in a surge of pricing across the board. Whether driven by population increases, rent growth or economic stability, the metro D.C. market is sure to thrive, even in the most uncertain of times.

— By Michael Murray, Associate, Greysteel. This article was originally published in the November 2022 issue of Southeast Real Estate Business.