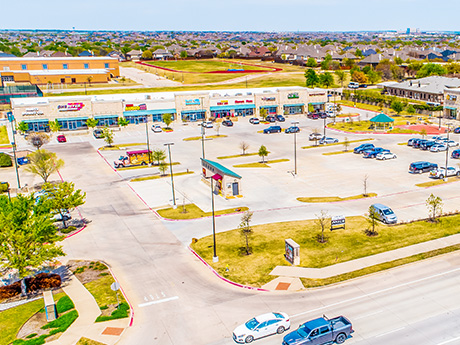 Marcus & Millichap recently closed the sale of Teel Crossing East, a 32,270-square-foot retail center in Frisco. As a submarket with a rapidly growing residential population and a declining retail vacancy rate, Frisco is seeing healthy demand from investors.

The Dallas retail climate is more favorable entering 2022 than it has been for most of the COVID-19 crisis.

Overall, the marketwide retail vacancy rate fell 50 basis points during the first three quarters of 2021, ending at an even 6 percent in September.

Nevertheless, that rate is about 100 basis points above the pre-pandemic level. A strong rebound in tenant demand is helping lower vacancy, however, with net absorption across the opening nine months of 2021 totaling more than 2.2 million square feet, compared with a net loss of 1.5 million square feet in 2020.

Additionally, the construction pipeline has shrunk considerably, helping mitigate supply-side pressure as the market bounces back. As of the fourth quarter of 2021, less than 1 million square feet of new retail product with an expected completion date in 2022 was under construction in the greater Dallas area.

This is a sharp contrast to the 2 million-plus square feet that developers delivered in each year between 2014 and 2020. Strengthening demand drivers amid a reduction in development suggest that downward pressure on vacancy will continue in the coming quarters.

Near-term uncertainty has mostly faded as retail metrics in Dallas steadily improve, and the longer-term outlook is even more promising. The market is growing at an accelerated pace, attracting new residents that are drawn to a reasonable cost of living and a higher availability of employment opportunities amid robust job gains.

Over the next five years, Dallas-Fort Worth (DFW) is projected to add more than 280,000 new households, an expansion trajectory that more than doubles the average among the country’s biggest markets. Many of these new residents will live within metro Dallas, boosting spending at local retailers.

The suburbs, particularly those in the northern portion of the metro, are poised to benefit from this growth as many homeowners and renters seek out neighborhoods that are less congested than the urban core and more desirable in terms of their school districts.

The Far North Dallas submarket, which encompasses suburbs outside of Interstate 635 — Frisco, Allen, McKinney, Plano, Garland and Richardson — has been the top-performing area in recent periods.

Overall retail vacancy here tapered 110 basis points over the first three quarters of 2021 to 6.2 percent. Notably, the multi-tenant sector drove the contraction, as this segment of the market was more disrupted by the health crisis than single-tenant due to elevated concerns of virus transmission at
high-traffic centers.

Multi-tenant vacancy in Far North Dallas subsided 180 basis points during the initial nine months of 2021 to 8.1 percent, the lowest rate there since 2018. Many retailers are eager to lease space in these fast-growing suburbs as the demand for goods and services will increase in conjunction with the local household count.

Grocery chain H-E-B is advancing its expansion into Dallas, having broken ground on two locations in Frisco and Plano. Both are 111,000-square-foot stores in the company’s flagship format and are set to open in the fall. The San Antonio-based grocer is also moving into a 75,000-square-foot space in McKinney in 2023.

Experiential retailers are committing to the submarket as well, highlighted by Life Time Fitness and its plan to take occupancy of a 190,000-square-foot space south of Addison.

Positives have emerged in the multi-tenant segment, but the landscape across greater Dallas remains bifurcated. West Dallas and Southeast Dallas recorded 60-plus-basis-point moderations in multi-tenant availability over the past four quarters, and each locale registered positive rent growth of at least 3 percent on an annual basis.

Southeast Dallas also claims the tightest multi-tenant vacancy rate among submarkets with at least 10 million square feet of inventory, notching a mark of 5.6 percent in September 2021. On the other end of the spectrum, five of eight Dallas submarkets had year-over-year rises in multi-tenant availability, and four had annual reductions in average asking rents as of the end of the third quarter.

North Central Dallas has been the most impacted, posting a multi-tenant vacancy rate in the double digits in September, after jumping by 250 basis points year over year, which contributed to an 8 percent decrease in the submarket’s average asking rent.

Variations in multi-tenant performances from submarket to submarket are influencing investment decisions. Roughly 40 percent of multi-tenant trades year-to-date through November have been assets located in Far North Dallas, as buyers are tracking household formation trends and retail metrics.

Here, investors are favoring community and strip centers, which often have entry costs well above the metroplex average of $321 per square foot and cap rates well below the DFW mean of 6.7 percent. Out-of-state buyers have been especially active in the corridor, creating a somewhat competitive multi-tenant bidding market in Far North Dallas, which is not replicated in many other markets amid the current environment.

Investors seeking lower entry costs and less competition are focusing on North Central Dallas and West Dallas, where shopping centers may be acquired for less than $300 per square foot.