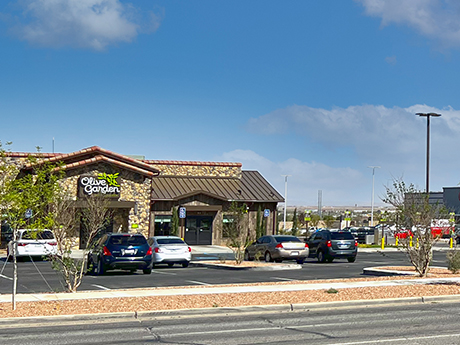 This image shows the new Olive Garden restaurant at the redeveloped site of the former El Paso Independent School District Tennis and Training center, which now houses a thoughtfully curated mix of retail and restaurant tenants. The project speaks to the creative ways in which developers in this market must think in order to supply quality space for a growing user base.

Historically, the El Paso market has often been overlooked, primarily due to its distance from other major Texas markets. However, that sentiment is shifting rapidly due to strong economic and population growth.

While an accurate figure is difficult to pin down, the number of new entries and expanding franchises within the market has exploded in recent years. “As recently as 2015, national and regional operators were only beginning to recognize the sales potential of the El Paso market and just how underserved the growing population had become,” states Scott Walker, president of MIMCO.

“Competition was limited, which led to advantages for existing operators. The landscape shifted dramatically due to the pandemic; since the second quarter of 2020, new retail categories have become active,” he continues. “Marketing quality sites generally leads to multiple offers from competing operators including car washes, lube shops, coffee shops and quick-service restaurants. We love to see this variety move into our market and drive competition for the next great location.”

Market competition is advantageous and a key driver of innovation. Retailers use competition to discover and adopt the most efficient processes that will allow them to deliver new and improved products to consumers. This newfound competition in El Paso is forcing retailers to up their offerings in order to capture market share in this consumer-driven economy.

MIMCO, like most landlords and developers in Texas, has seen an enormous jump in demand for sites that offer drive-thru and pick-up windows. The lack of existing supply, coupled with increased demand, has turned average pad sites into highly sought-after options in the market.

Traditionally, MIMCO would acquire land sites and market their least desirable portions to traditional retailers. Now, in the current climate, the demand for pad sites from new entrants to El Paso is what drives the marketing.

An added benefit is that these pad users drive so much traffic that it’s now easier to solve for the less-desirable or rear portions of sites. With this new demand, El Paso landlords have an exciting opportunity to reimagine their existing portfolios and consider new functionalities of sites they own.

With national tenants hunting for property free and clear of buildings, trees and other impediments, there is little hesitation to invest dollars toward repurposing sites. MIMCO has recently had success repurposing former small-format gas stations, well-positioned office buildings on major arterials and even tennis courts into a new class of re-tail loaded with quality tenants.

During the last two years, the primary focus was to assist the company’s existing tenants, although many challenges these businesses faced were outside of our control. Fortunately, the economy swiftly saw a return to pre-pandemic occupancy levels, even as consumer patterns were changing. While MIMCO is pleased to see new growth in its own centers, the team is also excited to see continued expansion in the community through new developments.

Although activity is up and deals are closing, it is important to consider the massive increases in construction, both with regard to materials and labor costs. Shipping logistics have been thrown off, and increasingly long delays are common.

Planning and budgeting for new projects has never been an exact science. But these uncertainties have created a climate of unknowns. Inflation is top of mind and is forcing landlords to push rents across their portfolios to keep up with the market.

Two corridors that typically stand out to new entrants in the market are Art-craft/Paseo Del Norte in the Northwest submarket and Eastlake Boulevard/I-10 in the Southeast submarket. While activity in those submarkets is incredible and usually a top choice for a first or second location, more operators are pivoting to find infill sites for subsequent locations.

One prime example of these infill sites can be seen via driving by the site formerly known as the El Paso Independent School District Tennis and Training Center. When MIMCO won the bid for the 10-acre site covered with 20-plus tennis courts and a clubhouse, many thought it was an odd play to take on a large and speculative project in the Northeast submarket. This image shows some of the tennis courts that were part of the site that eventually became a retail development on the city’s northeast side.

When marketing of the redevelopment kicked off, activity was strong. It quickly became clear that there was plenty of interest from national and regional operators to fill a void in an underserved market. \

At the height of marketing this project, the pandemic hit, leading to uncertainty and some delays. However, as time passed, it became clear that business would return, operators still needed to grow and the fundamentals that validated the site in the beginning remained the same.

Olive Garden had been looking to fill a hole in this submarket for years in order to capture the surrounding rooftops. Tommy’s Express Carwash recognized the lengthy wait times at the limited number of car washes in the area. Other uses — from traditional retail/service providers to medical, restaurant and hotel users — landed sites to round out the development in a combination of free-standing and multi-tenant buildings.

More recently, MIMCO signed its first deal with Dutch Bros., an exciting drive-thru-focused coffee chain that is relatively new to El Paso. As of today, this development has two pad sites remaining that offer an opportunity to join an established and well-rounded tenant mix.

Now, in the second quarter of 2022, we remain deeply aware of the headwinds affecting the industry and the nationwide economy. Rising inflation, rising interest rates and geopolitical unknowns will undoubtedly affect the community’s daily lives and wallets.

That said, if the company’s rebound from the Great Recession and global pandemic are any indication, things will continue to look up for El Paso and the state of Texas for the foreseeable future. El Pasoans are widely known for their warm and welcoming personalities. The city’s property owners, developers and real estate professionals are no different. Together, we look forward to increased and continued attention from retailers, service providers and restaurants looking to plant their flag in this thriving Texas city.