Developers to Build $2B Fields West Mixed-Use Project Near Dallas, Including Ritz-Carlton Hotel 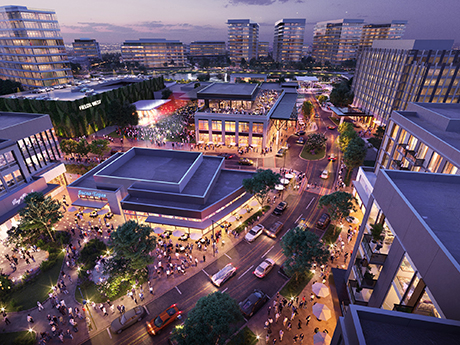 Phase I of Fields West in Frisco, Texas is expected to open in late 2024. (Rendering courtesy of Gensler)

FRISCO, TEXAS — A development partnership has unveiled plans for Fields West, a $2 billion mixed-use project in Frisco, a northern suburb of Dallas. The 180-acre project will be situated along the Dallas North Tollway within Fields, a 2,500-acre master-planned development that houses PGA of America’s new headquarters.

The development partnership for Fields West comprises Hunt Realty Investments, Karahan Cos., Chief Partners LP, CrossTie Capital Ltd. and the heirs of Bert Fields Jr., the original landowner and namesake of the development. Dallas-based Hunt Realty purchased the site, then known as Headquarters Ranch, from the Fields estate back in 2015.

While individual components for Fields West weren’t disclosed, the developers did sign an agreement with Marriott International to bring a new Ritz-Carlton hotel to anchor the development. The size and room count for the new hotel were not announced.

Project architect Gensler announced that Fields West will be “three times” the size of Legacy West Urban Village, a retail project within the $3 billion Legacy West development in Plano that has more than 300,000 square feet of retail space. Karahan Cos. is also the developer behind Legacy West.

Additionally, Gensler announced more concrete plans will be unveiled at ICSC Las Vegas, a marquee trade show for the retail real estate industry that will be held in late May. The developers are targeting a late 2024 opening for Phase I of Fields West, according to Gensler.