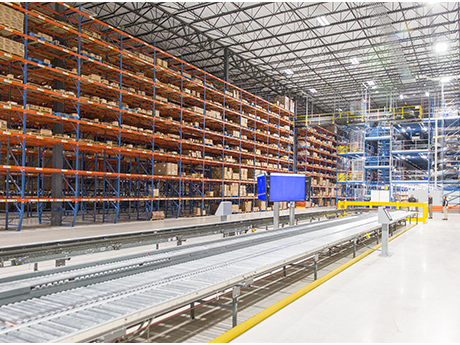 Dollar General expects construction on its 1 million-square-foot facility in North Little Rock, Ark., to begin this fall and wrap up by late 2023. Pictured is the interior of a Dollar General distribution center at an undisclosed location. (Photo courtesy of Dollar General)

NORTH LITTLE ROCK, ARK. — Dollar General, the national discount merchandise retailer, has unveiled plans to develop a new $140 million distribution center in North Little Rock. The Goodlettsville, Tenn.-based company expects construction to begin this fall and wrap up by late 2023. Dollar General announced the project as part of a three-distribution center expansion in Arkansas, Colorado and Oregon that represents a total investment of $480 million.

The 1 million-square-foot facility in Arkansas will be serviced by DG Private Fleet, Dollar General’s in-house freight division that launched in 2016 and currently utilizes 950 tractors and drivers. The distribution center will also be a “dual facility,” meaning it will service the traditional Dollar General merchandise as well as the DG Fresh supply chain network.

The Northwest Arkansas Democrat Gazette reported that Dollar General bought the 152-acre site, which is located along U.S. Highway 70 and near an Amazon fulfillment center, from Tulip Farms Inc. for $2.4 million. The development team for the project was not released or reported.

Dollar General currently employs more than 4,300 Arkansas residents, having opened its first store in the state in 1975 and now operating approximately 500 stores. Management hiring at the industrial facility is expected to begin in spring 2023, with warehouse team member recruitment currently scheduled to begin in fall 2023.