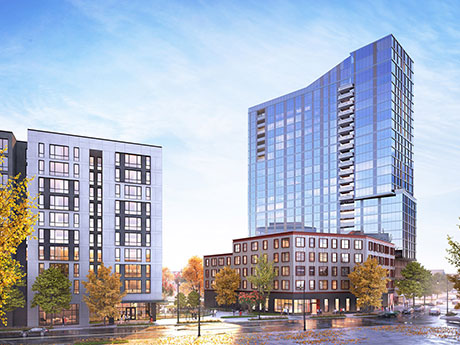 This rendering shows plans for the residences at the Shops at Big Deahl.

As a longtime developer of multifamily, commercial and mixed-use properties in Chicago, I can tell you we’ve never seen anything like the last few years. From the highs of the pre-pandemic multifamily construction boom to the lows of the first year of COVID-19 lockdowns — when downtown emptied out — to today, it’s been a rollercoaster ride. But the multifamily sector has ultimately proved resilient and is roaring back stronger than ever.

Here’s a look back at the past three years and a glimpse of three projects we broke ground on during the pandemic: Schiller Place, Big Deahl and Harrison Row.

For the years 2019-2021, developers were expected to build 9,000 apartment units in downtown Chicago, according to Integra Realty Resources. This figure was lower than the expected 10,700 units because of rising construction costs and uncertainty around property taxes, but still strong. Average rents for downtown Class A rental communities were $3.31 per square foot, per Integra, and occupancy was a robust 94.9 percent.

When the pandemic hit nine months later, it greatly slowed that activity. Gov. J.B. Pritzker issued the first stay-at-home order on March 20, 2020, followed by other state and city rulings that emptied downtown offices; moved schools online; closed Chicago’s parks, beaches and trails adjacent to the lakefront; and shut down indoor operations at restaurants, entertainment venues, museums and other attractions that tether people to the urban core.

No longer able to afford rent if unemployed, or seeking space and company if able to work remotely, many downtown apartment dwellers packed up and moved out, leading some to question whether the urban exodus would be permanent. By the end of 2020, Chicago’s downtown apartment occupancy rate had declined to 86.5 percent, per Integra — and as low as 70 percent in some buildings in the Loop, according to participants in a Chicago multifamily summit in March 2021 — forcing landlords to make major concessions in hopes of luring renters back.

But slowly, people began to return to the high-rises of the Loop and adjacent downtown neighborhoods. Perhaps encouraged by all the concessions, as well as the gradual reopening of businesses and cultural institutions, more renters returned in spring and summer 2021 and were back in full force by third-quarter 2021, causing occupancy to rebound to more than 94 percent, per Integra. That came about despite only about 30 percent of office workers back in their offices, Kastle Systems data showed, and crime in the central business district was up, according to the Chicago Police Department.

Downtown Class A rents rose 32 percent in 2021, according to Integra, exceeding pre-pandemic levels, and overall rents are expected to rise another 5 percent in 2022. The rebound has happened as single-family home prices have consistently posted double-digit monthly increases due to low inventory. This, combined with rising interest rates, means many would-be buyers are continuing to rent, with demand especially high for units that are more attainably priced.

According to Marcus & Millichap’s 2022 U.S. Multifamily Investment Forecast, national multifamily construction starts slowed by nearly 40 percent during the health crisis. But construction has turned a corner. From first-quarter 2021 to the same period 12 months later, Chicago-area developers completed 8,071 units, most in the Loop, West Loop and River North. For all of 2022, developers are expected to complete about 6,000 units; average effective rent is expected to be $1,825 and vacancy is expected to be 2.4 percent.

Made in the pandemic

With new downtown buildings catering almost exclusively to the high end of the market, the need for more affordable options is greater than ever. Chicago’s Department of Housing estimates the city has a shortage of 120,000 affordable units (for-sale and rental). Schiller Place and The Shops at Big Deahl, two projects that my company Structured Development is building, include both market-rate and affordable units, as required under the city’s Affordable Requirements Ordinance (ARO).

Having broken ground in February 2021, Schiller Place is a three-building, 48-unit mixed-income rental community we’re developing with Evergreen Real Estate Group at 711, 731 and 749 W. Schiller St. on the Near North Side, adjacent to NEWCITY, a mixed-use development in the Clybourn Corridor. Eight units will be market-rate and 40 are reserved for households earning between 30 and 60 percent of the area median income (AMI). This provides affordable housing within a highly desirable neighborhood featuring established retail, entertainment, schools and walkability.

A number of occupants will be former Cabrini Green public housing residents. Schiller Place fulfills Structured Development’s aldermanic commitments at the time of the original rezoning of NEWCITY. Demand for the apartments is strong with the first residents scheduled to move in within weeks.

The Shops at Big Deahl is a $250 million mixed-use development with 487 residences built around a public park in the Clybourn Corridor, where we have been developing real estate for 25 years. The site is bounded by Blackhawk, Dayton and Kingsbury streets, northwest of the former Cabrini-Green project, on the site of the old Seng Manufacturing Co., a furniture hardware manufacturer that subsequently became a photography studio owned by Rosemary and David Deahl.

In recent years, the increasing popularity of downtown and near-downtown living has prompted city leaders to change zoning in the area from manufacturing to a mix of uses, including multifamily.

The first piece of Big Deahl was a 40,000-square-foot climbing gym called Movement Lincoln Park, which opened in fall 2021. We currently are under construction on the balance of the project, which will include a 10-story, 400-bed co-living building called Common Lincoln Park; a 27-story, 327-unit market-rate rental tower developed with White Oak Realty; and an affordable condominium building, The Seng. All the buildings will be adjacent to a new community park open to the residents and public.

The Seng will provide affordable homeownership to families struggling to find housing in the expensive Lincoln Park neighborhood. As part of Structured’s commitment to the city’s ARO, The Seng will deliver 34 three- and four-bedroom units to income-restricted buyers at below-market prices. It’s a rare example of a for-sale, affordable option in the neighborhood and another example of how the ARO can create more housing options.

Common Lincoln Park, managed by industry leader Common, will provide one- to four-bedroom apartments at rental rates significantly below comparable properties in the Lincoln Park area. The neighborhood’s walkability, amenities and access to transportation make Common Lincoln Park highly desirable to today’s renter. Occupancy is expected to begin in the third quarter of 2023.

We broke ground on the 327-unit apartment tower in April 2022. This market-rate rental community will have the luxe finishes and amenities that city dwellers prefer, along with easy access to nearby retail and a near-transit location that puts them minutes from downtown. Deliveries will begin in spring 2024.

The final development underway is Harrison Row Townhomes, located in Chicago’s East Garfield Park neighborhood, providing three-bedroom affordable townhomes for sale to income-qualified buyers and making a significant investment in an underserved neighborhood. It is yet another example of a successful implementation of the ARO as Harrison Row provides the compliance for offsite affordable units tied to Big Deahl.

Our ability to move forward with new mixed-income developments amid the many challenges posed by the COVID-19 pandemic underscores the enduring appeal of city living, even if workers don’t return to offices full-time. Amid growing concerns over affordability, projects that consider the needs of all renters — not just the highest earners — are best positioned to garner community support and literally lay the foundation for a more equitable future.

Mike Drew is a principal with Structured Development. This article originally appeared in the June 2022 issue of Heartland Real Estate Business magazine.