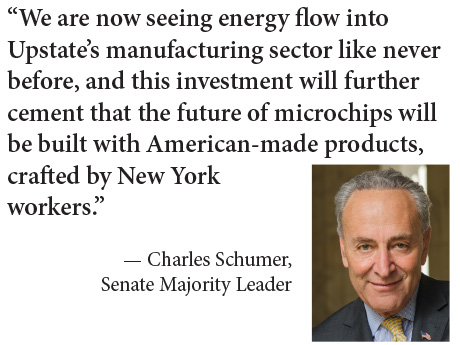 The facility will house manufacturing, storage and administration for the production of dry pump equipment for the U.S. semiconductor industry. Edwards Vacuum will create 600 jobs for the larger Buffalo-Rochester Tech Corridor.

The announcement builds on Micron’s recent $100 billion investment in Central New York, as well as the as New York’s recently signed Green CHIPS legislation and the federal CHIPS and Science Act, to make New York a central figure in the global semiconductor industry.

“We are now seeing energy flow into Upstate’s manufacturing sector like never before, and this investment will further cement that the future of microchips will be built with American made products, crafted by New York workers,” says Senate Majority Leader Charles Schumer.

As part of the agreement with Edwards Vacuum, New York’s chief economic development agency, Empire State Development, has offered up to $21 million in a combination of performance-based Excelsior Jobs Tax Credits, investment tax credits and an additional $1 million to support workforce development and the training of a diverse and inclusive workforce in exchange for 600 new full-time jobs at the location.

It is anticipated that Edwards Vacuum will apply for agreements at a later date with the Genesee County Economic Development Center, which oversees STAMP, to support the firm’s investment through property, sales and mortgage tax assistance. The construction timeline for the new facility was not disclosed.

Edwards Vacuum has more than 8,000 employees worldwide engaged in the design, manufacture and support of vacuum and exhaust management equipment. The company operates manufacturing facilities in Europe, Asia and North America.