Posted on May 25, 2022 by Kristin Hiller in Development, Illinois, Midwest, Office, Restaurant, Retail 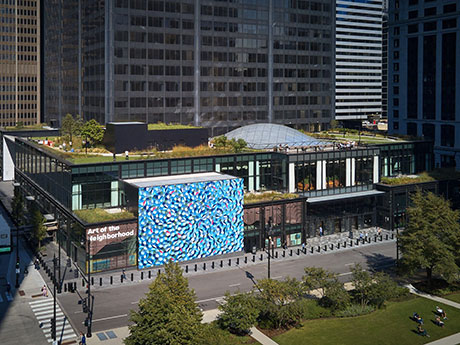 A ribbon-cutting ceremony took place Tuesday, May 24 to celebrate the completion of the project. (Photo courtesy of Tom Harris and design by Gensler)

CHICAGO — EQ Office, the U.S. office portfolio company wholly owned by Blackstone, has completed its more than $500 million renovation of Chicago’s Willis Tower. The 110-story tower is now certified LEED Platinum and is the largest building in the U.S. to achieve that designation, according to EQ Office.

Part of the transformation is Catalog, a 300,000-square-foot retail, dining and entertainment destination at the base of the tower. The name Catalog is a nod to the Sears Roebuck Co. and its printed catalog. Designed by Gensler, Catalog features restaurants such as Tortazo by Rick Bayless, Shake Shack, Joe & the Juice, Foxtrot, Starbucks, Brown Bag Seafood Co., Do-Rite Donuts & Chicken, Sushi-San and Sweetgreen. Kindling, a two-story restaurant concept from Chicago’s 50/50 Group, as well as Urbanspace, a food hall, are both slated to open in late summer or early fall. A 30,000-square-foot outdoor terrace sits atop Catalog.

The Skydeck observatory at Willis Tower also underwent a renovation through partnerships with exhibit design firms Thinc and SOM. An interactive “best of Chicago” museum-like exhibit celebrates the personality, history and neighborhoods of Chicago.

Gensler designed the building’s new exterior façade at the base. SKB Architecture and Design handled the design of three new building entries. Another feature of the renovation is 150,000 square feet of tenant-exclusive amenity spaces designed by Jose Gonzalez.