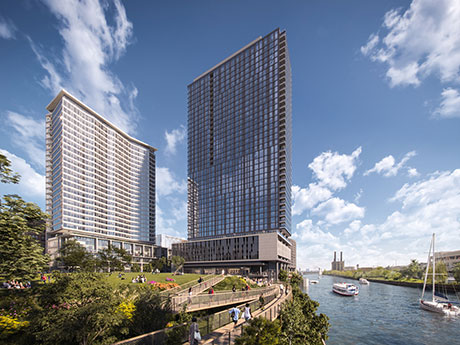 Lendlease is building The Reed at Southbank, a luxury residential development with 216 condominium units and 224 apartment units in Chicago.

The combination of a spike in material costs, disruptions in the supply chain and a lack of available workers has created a difficult building environment for general contractors.

“It’s no secret that there are pressure points on our industry right now,” says Kinjal Patel, general manager and senior vice president for Lendlease Construction in Chicago. “The challenges we’ve faced the last couple years around supply chain disruption and rising materials and labor costs have only escalated, making planning and budgeting for projects incredibly unpredictable. In some cases, increases are as high as 10 percent in a span of just six months.”

Despite these challenges, general contractors maintain robust pipelines and anticipate that this year’s revenues will exceed last year’s totals.

“Last year, there was a lot of uncertainty as we were still in the process of rebounding from COVID, and construction deals were just finding their legs,” says Michael Meagher, president of Chicago-based McHugh Construction. “Our backlog today is better than the corresponding time a year ago as deals have continued to push forward. We forecast 2022 to be a better year for us than 2021.”

Meagher anticipates that McHugh’s revenues will be more than 30 percent above last year’s total. But he does raise a cautionary note, as inflation and rising interest rates are making it harder for projects to pencil out and for developers to secure financing.

In Patel’s eyes, materials pricing is the top challenge for builders today simply because there’s so much unpredictability.

The producer price index for new nonresidential building construction — a measure of the price that contractors say they would bid to build a fixed set of buildings — increased 19.8 percent year over year in June, according to the Associated General Contractors of America (AGC). As of June, costs rose faster than bid prices for a variety of inputs in the index, including diesel fuel, prepared asphalt, concrete products, plastic construction products and insulation materials.

Patel says that the most important strategy for dealing with price escalations is communication. “If we hear from our suppliers that prices are shifting, we communicate that to our clients and let them know that we might want to look at that element of the project again for another round of budgeting.”

Another tactic is early awards. “We’re pushing the client and architect to propose design concepts sooner than they would have in the past,” says Patel. “This approach lets us bid and award the project earlier to lock in the supply chain and pricing.”

In Chicago, Lendlease is building The Reed at Southbank, a 41-story luxury residential development with 216 condominium units and 224 apartment units. Lendlease topped out the tower in July and the project is slated for completion in 2023.

Patel says that Lendlease has experienced some projects being put on hold due to economic uncertainty. Still, the company’s pipeline is full and its outlook for the remainder of the year is optimistic.

Ira Singer, founder and COO of Northbrook, Illinois-based Mosaic Construction, says that in addition to preliminary budget estimates, his firm is providing clients with updated pricing and revised timing on a more frequent basis. This process enables more points where clients can make educated decisions based on item costs and timelines.

Mosaic, along with many firms and vendors, includes language in contract proposals to protect against price increases from the bidding stage to the contract stage. “The faster a client can decide on a trade supplier and approve orders and purchases, the more effective they can be with holding the price,” says Singer.

Mosaic is currently performing a lot of work for Expansive Coworking in Chicago, Milwaukee and Minneapolis. Mosaic’s sister company, Cannabis Facility Construction, specializes in the marijuana sector, including the construction of indoor cultivation facilities, processing labs and retail dispensaries.

“Our firm’s revenue is up significantly as clients are embarking on larger, more complex projects,” says Singer. “Given the supply and labor issues in the industry, people are not waiting to get started.”

In Singer’s eyes, supply chain issues are far and away the biggest challenge for builders in today’s market. “A material or equipment item today could be $5 with a lead time of two weeks. If we look tomorrow, it could be $25 with a six-week lead time. There is no warning or indication of this fluctuation,” he says.

According to Singer, there are
never-before-seen lead times eclipsing 52 weeks on certain products such as appliances. Other significant delays include the lead time for the delivery of materials to erect steel buildings, hovering around 36- to 40-week lead times.

Mosaic is trying to stay ahead of the curve as much as possible by preordering equipment immediately when available, or even resequencing parts of projects that would normally be in a different order.

Novi, Michigan-based Oliver/Hatcher Construction has also taken this approach. On its most recent logistics center project, the firm flipped its building model to construct from the inside out, says company president Paul Hatcher. “The precast walls are normally installed first, but due to delays we resequenced our schedule to start with the installation of the available steel.”

Hatcher believes that material shortages are the biggest challenge today. “Communication and collaboration between all parties is even more important as we look for alternative materials, equipment and means of construction that could save time in the schedule, costs or both.”

In metro Detroit, Oliver/Hatcher is building a 444,000-square-foot logistics park and a 650,000-square-foot warehouse. The firm is also finalizing construction on a three-building industrial park spanning more than 2.1 million square feet.

Supply chain disruptions are the biggest challenge because they drive a domino effect that leads to higher materials prices, says McHugh’s Meagher.

“Construction has relied more heavily on global manufacturers for building materials who have been impacted by travel restrictions and labor shortages,” he says. “We advise owners and developers to get projects underway sooner than later, considering today’s inflationary pressure and anticipated interest rate increases. We also provide recommendations for equivalent domestically sourced materials as alternatives to foreign products.”

McHugh has several mid- and high-rise multifamily projects underway in Chicago, including 1000M, a 73-story building located at 1000 S. Michigan Ave. designed by the late Helmut Jahn. Unique projects underway by McHugh include FanDuel Sportsbook, a new sports wagering lounge at Chicago’s United Center, and Ramova Theater, the historic renovation of a theater and buildout of adjacent space for a new brewery and restaurant in Chicago’s Bridgeport neighborhood.

Howard Green, executive vice president with Rosemont, Illinois-based Meridian Design Build, believes that labor is the biggest challenge for general contractors currently. “Subcontractors have a finite number of crews qualified to execute on large projects such as those that we are involved in,” he says.

Meridian is currently working on an extensive project that will convert a 907,500-square-foot industrial building that was completed on a speculative basis for Clarius Partners in Joliet last year into an electric vehicle manufacturing plant for Lion Electric. The scope of the project involves the addition of interior mezzanine levels, more than 85,000 square feet of office space, a 1,000-car employee parking lot and modifications to the building shell to accommodate vehicle assembly lines.

“We have a strong backlog and a significant number of projects underway or soon to break ground that will continue into the fourth quarter of 2022 and beyond,” says Green. “We are expecting revenues to increase more than 50 percent over last year.”

“Lack of labor is a large part of why commodity prices have skyrocketed,” states Brucato. “Manufacturers of certain materials have actually been forced to reduce their weekly production output because they do not have adequate labor to effectively produce for an entire 40-hour week. This has exacerbated the imbalance of supply and demand, which always leads to increased costs.”

Brucato says his firm has learned to think not only “outside the box,” but “way outside the box” when it comes to finding alternative solutions to deal with labor and materials shortages.

“Our belief is that this ties back to 2020. The slowdown from that year started its recovery in 2021 and continues in earnest in 2022,” explains Brucato.

“We are seeing the skilled labor pool tightening,” observes Singer. To keep projects moving forward, Mosaic keeps a deep bench of trade and supplier resources on call in order to find backups or alternative solutions.

Lendlease, which is proactive in addressing labor concerns, supports organizations like HIRE360, which seeks to expand employment and advancement opportunities for underrepresented populations pursuing careers in the trades.

“It’s important that we continue educating young people, including women and people of color, about opportunities in this industry,” says Patel. “We are advocating for them to consider the trades and union work as an alternative to four-year degrees, which aren’t a fit for everyone.”