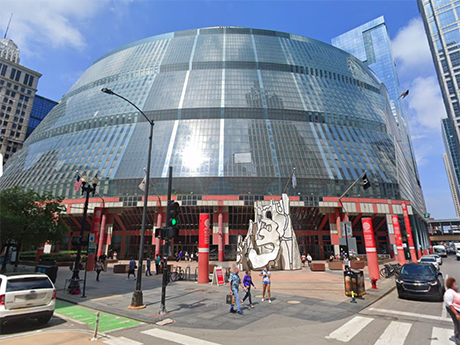 The 17-story Thompson Center is the only building in the city of Chicago where six L Train lines converge, connecting to Chicago’s South, West and North sides — a key point of attraction for Google, which is seeking to create an office environment that suits the future needs of its growing workforce that features a hybrid of in-office and from-home employees.

In December of last year, the State of Illinois agreed to sell the Thompson Center to JRTC Holdings, a group led by developer Michael Reschke of Prime Group, for $70 million in an upfront cash transaction. Under terms of the deal, the state initially agreed to buy back a third of the property following renovations for $148 million.

Illinois Governor J.B. Pritzker announced a new agreement for the building yesterday morning, in which JRTC will acquire the Thompson Center for $105 million with $30 million paid upfront in cash. As part of the deal, the state will acquire the title to the former BMO Harris Bank headquarters at 115 S. LaSalle St. from JRTC and will no longer buy back space at the Thompson Center.

The state will relocate its workforce of nearly 1,800 employees currently working at the Thompson Center and several additional downtown offices to 115 S. LaSalle following renovations by JRTC. Updates are expected to take 18 months, with partial occupation by state employees beginning eight months after the sale.

Famed Chicago architect Helmut Jahn, who passed away in May of last year, designed The Thompson Center, which the state commissioned and opened as the State of Illinois Center in 1985. The property was renamed in 1993 to honor Governor James R. Thompson.

Architectural firm Jahn, named for the company’s namesake and original architect of the property, will design the redevelopment.

“The original design of the James R. Thompson Center was centered on the transparency of government, and now it will showcase the openness of technology, which in many ways is representative of its initial concept as a building designed for the 21st century,” CEO Evan Jahn said in a statement to The Chicago Tribune.

The BMO Harris Bank building acquired by the state as part of the Thompson Center transaction is a portion of a three-building complex also located in the Chicago Loop. The state will be the sole owner of the complex’s west building, which totals 591,845 square feet, while JRTC will own the remaining two buildings.

“This transformative agreement will save our taxpayers nearly a billion dollars over the next thirty years and further Chicago’s reputation as one of the great tech hubs — not just of the United States, but of the world,” says Governor Pritzker. “Together, we are bringing a 21st century vision for the LaSalle Street corridor to life.”