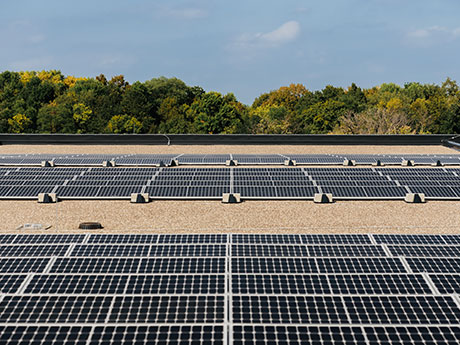 Graco invested in solar energy for the new building in Dayton. There are more than 3,100 solar panels on the roof.

DAYTON, MINN. — GRACO Inc. (NYSE: GGG), a manufacturer of fluid handling equipment, has opened its new 538,000-square-foot facility in Dayton, a northern suburb of Minneapolis. The building, which houses office and factory space, marks Graco’s fourth campus in Minnesota. Graco, working with Impact Power Solutions, is investing in solar energy with the new building. The company added a 1.4-megawatt solar array, consisting of more than 3,100 solar panels on the roof of the building. Over the next 30 years, the solar array is expected to offset more than 23,000 tons of carbon dioxide. The project team included McGough as general contractor, HGA as architect and Tegra Group as project manager.