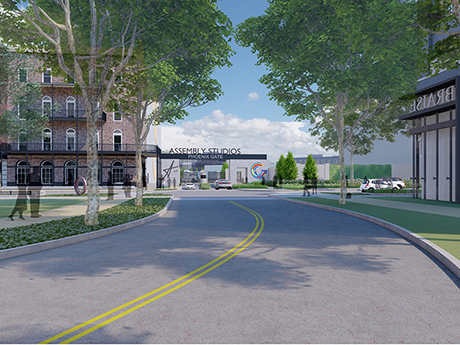 Shown is a rendering of Assembly Studios, the anchor of the 135-acre Assembly Atlanta mixed-use development underway in Doraville, Ga.

DORAVILLE, GA. — Gray Television Inc. has entered into an operations agreement with NBCUniversal Media LLC to lease and operate a new studio campus spanning 43 acres in metro Atlanta. The Assembly Studios facilities will be situated within Gray’s Assembly Atlanta project, a 135-acre mixed-use development in Doraville that once housed GM’s Assembly plant. NBCUniversal’s lease with Gray will include a suite of facilities needed to support TV and film production. The new facilities will include multiple soundstages, production office space, warehouses and mill space, as well as parking and other necessary amenities. Adjacent to the Assembly Studios complex is Third Rail Studios, a movie and TV production facility spanning seven acres that opened in 2016 and that Gray acquired in September 2021. NBCUniversal will manage all studios onsite, including Gray’s own studio facilities and Third Rail Studios.

When fully operational, over 4,000 people will be expected to work within Assembly Studios and Third Rail Studios, and the productions filmed there will support thousands of additional new jobs. Last year, Gray retained Atlanta-based The Gipson Co. as the developer and construction manager for Assembly Atlanta and JLL as the development’s strategic advisor.