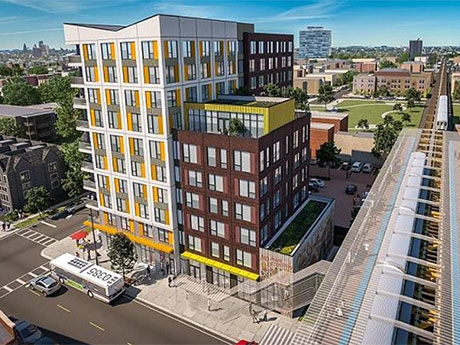 The developers have topped out construction of the first of three planned buildings at 43 Green.

CHICAGO — The Habitat Co. and P3 Markets have topped out construction of the first building at 43 Green, a $100 million mixed-income apartment development in Chicago’s Bronzeville neighborhood. Centered around the Chicago Transit Authority’s 43rd Street Green Line station, the project represents the first equitable transit-oriented development (ETOD) on Chicago’s South Side. The project will be developed in three phases and ultimately bring 300 new apartments to the neighborhood.

The first building is the largest of the three planned buildings. The 10-story asset will house 99 apartment units as well as 5,500 square feet of retail space. Half of the units will be reserved for households earning up to 60 percent of the area median income.

Construction of Phase I is slated for completion in February 2023. Construction on Phase II is expected to begin later this year. Bowa Construction and McHugh Construction are jointly building the project. Landon Bone Baker is the architect. Momentum Coffee and Super Cycle will occupy retail space.