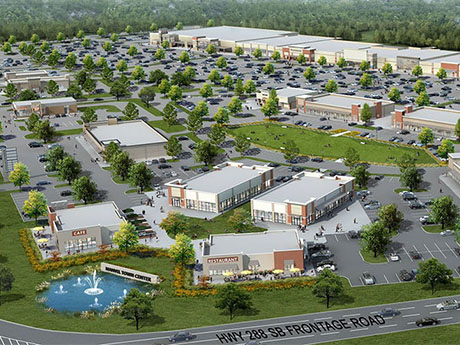 Last summer, Weitzman broke ground on Phase I of Manvel Town Center, a 273-acre mixed-use project located south of Houston. The centerpiece of the initial phase is a 100,000-square-foot H-E-B grocery store. Demand for essential retail uses such as grocery remains strong as the Houston area continues to see its population grow.

Houston’s construction of new retail space, after reaching a record low in 2021, is on track to exceed that level, based on projects in the pipeline for this year. But the increase is not large, and total new deliveries will remain on the conservative side. The limited new space is driving demand to existing projects and helping lift occupancy levels marketwide.

The limited deliveries of new retail space, combined with healthy retail demand and limited closings, is helping Houston’s retail market build on the occupancy gains it experienced during 2021. As a result, the retail market currently has a healthy occupancy rate of 96.1 percent.

The market remains among the strongest in recent memory, although economic issues — rising interest rates, increased construction costs and inflation — may lead to a slowdown.

On the positive side, tenant, developer and investor interest remains extremely high since retail real estate is a long-term game that factors in short-term concerns.

The retail market also benefits from several positive influences, including robust demand for small-shop space, new construction that is either built-to-suit or significantly preleased, healthy job and population growth and an economy that is bolstered by rising energy prices.

Occupancy is also stable thanks to limited large-format closings, with the most notable being the 51,000-square-foot Randalls grocery store at 3346 Highway 6 in Sugar Land, which closed in June 2022. The Macy’s store and furniture clearance center also closed during the first half of 2022 as the final retailer at San Jacinto Mall in Baytown. However, the mall is removed from available inventory due to the fact that it is slated for redevelopment as San Jacinto Marketplace.

Expanding small-shop tenants have been particularly active, with the most notable demand coming from restaurants, service retailers, beauty, fitness, medical and dental uses. Junior anchors such as discounters are also active, resulting in a shortage of well-located box vacancies on the market.

To give an example of how strong the demand is for existing vacancies, three former 24 Hour Fitness locations that closed in 2020 during the first year of the pandemic were backfilled by Gold’s Gym, which itself closed locations during the worst of the pandemic.

The three spaces, accounting for a total of nearly 90,000 square feet, are located in Bingle Crossing at State Highway 290 and Bingle Road; Friendswood Crossing at FM 528 and FM 518; and Northchase Plaza at FM 1960 and Veterans Memorial Drive.

Another example involves Rice Epicurean Market, which announced the closing of its location at 2020 Fountain View in late July. That was followed by an announcement of plans to backfill the soon-to-be-vacated space  from Spec’s Wine Spirits & Finer Foods.

Other large-format retailers expanding in existing space included dd’s Discounts, a division of Ross Stores, with multiple new locations in backfilled space; American Furniture Warehouse, which backfilled a 130,000-square-foot former Sam’s Club in Tomball; Dick’s Sporting Goods, which backfilled a former Bed Bath & Beyond at Meyerland Plaza, located at Loop 610 North at Beechnut Street; Star Cinema Grill, which will open in the historic River Oaks Theater space at 2009 W. Gray after the previous cinema operator shuttered in 2021; Puttshack, a modern mini-golf concept, which leased 26,000 square feet in downtown’s The Highlight, the new name of the renovated The Shops at Houston Center; and retailers like Burlington, Painted Tree Boutiques, Skechers, Floor & Décor and several others.

The development of new space in metro Houston has remained on the conservative side for years, reaching a record low in 2021. At this time, limited new construction starts and pandemic-related delays of large projects resulted in new space deliveries of only 535,000 square feet in new and expanded projects with 25,000 square feet or more.

For 2022, based on projects that are underway and expected to be completed during the 2022 calendar year, construction is set to jump to nearly 875,000 square feet of space in new and expanded projects with 25,000 square feet or more of retail space. That total should increase even more in 2023 as several anchor stores, including Target and H-E-B, come on line.

As retail leasing demand has remained robust, rental rates on average have reached and even exceeded pre-pandemic levels.

Demand for Class A space, especially for quality retail inside the Interstate 610 Loop, can result in small-shop rates ranging from $45 to $60 per square foot or more.

These are average asking rates, and effective rates can be lower over the terms of a lease due to concessions such as free rent and finish-out allowances, although concessions remain limited for the highest-quality space.

The outlook for Houston’s retail market for the remainder of 2022 and going into 2023 is positive, thanks to continued economic strength seen in job, population and housing growth as noted in the most recent economic reports.

Houston is also seeing the job market regain its strength, with metro Houston adding 31,300 net new jobs this June, according to the Texas Workforce Commission. This job growth is actually above the healthy pre-pandemic level and in fact is the second-best June on record. For all of 2022, the Houston Partnership expects the metro area to add more than 100,000 net new jobs.

The market’s economic strengths include greater Houston’s housing market, which, due to impressive population gain, is experiencing strong  sales of existing homes and new starts. The Houston MSA continues to report robust population growth, with a 12-month gain of more than 69,000 new residents for the period ended July 2021, making it the second-fastest-growth large metropolitan area in the country.