How Tenants Can Curb Effects of Inflation in Commercial Leases

Posted on October 19, 2022 by Taylor Williams in Features 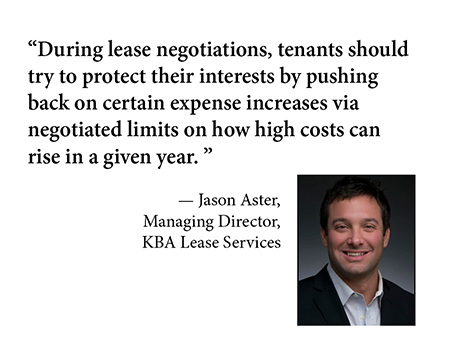 Inflation hit 9.1 percent in June, the fastest pace of escalation in more than 40 years as measured by the Consumer Price Index (CPI), and hasn’t retreated much since then. And while businesses are factoring soaring prices into many decisions, they should make sure to keep a close eye on their leases.

However, sharing the burden of inflationary increases should be fair to both tenants and landlords. During lease negotiations, tenants should try to protect their interests by pushing back on certain expense increases via a negotiated limit on how high costs can rise in a given year.

A typical lease requires tenants to pay for certain operating expenses, many of which are affected by inflation.

For some of them, such as taxes, insurance and utilities, there is not much landlords can do to control these costs, which are determined by municipalities, insurance companies and utility providers. Accordingly, both landlords and tenants will need to absorb any increases in these noncontrollable expense types.

On the other hand, all other operating expenses are, theoretically, at least partially controllable by landlords. For example, payroll, services and amenities, as well as repair, replacement and maintenance expenses are, for the most part, under the landlord’s direct control.

While the distinction might seem clear, landlords are incentivized to become ever more sophisticated about what they consider noncontrollable costs, since these are generally borne by their tenants. For example, who a landlord hires to perform maintenance in the building is under his or her control. But if the maintenance team is unionized, a landlord might argue that the union rates are out of his or her control, while non-unionized labor is a controllable expense.

A debate may also arise about what is a repair versus a replacement versus a capital improvement and whether the cost was unavoidable (noncontrollable) or elective (controllable). In addition, most leases contain different rules for how each of these cost types are passed on to tenants. Even if the project is a full-on capital improvement, the landlord might try to pass through the cost to tenants anyway.

To minimize the impact of inflation and landlords’ decisions on operating expenses, tenants can negotiate for a cap on controllable expenses at a certain growth rate per year. However, if caps are not already in place in an existing lease(s), landlords are not going to agree to cap expenses midstream and take on the burden of cost increases by themselves.

But for new deals or significant lease modifications, given the current economic climate and tenant-friendly leasing environment (at least in many markets), landlords will likely agree to cap their controllable expenses. Over the last several decades, caps have been relatively low — in the range of 3 to 5 percent per year. But those caps may jump to 8 to 10 percent year over year in the current climate to ensure landlords are not left holding the bag for a large portion of the inflationary increases.

Whatever the rate, the first step is coming to an agreement about how to define controllable expenses. Once the expenses that can be capped have been defined, it’s important to consider the specific mechanics of the cap calculation. There are several methods:

So let’s say both parties have negotiated a cap on controllable expenses. It may be higher than the historical norm because of the high rate of inflation, but at least the downside is limited and expenses are remaining predictable.

What tenants don’t typically consider is that their landlords might be working with 50 to 60 different leases, all with individually negotiated provisions. Because some leases are built from the landlord’s lease template and others from a tenant’s template, each lease can have different types of caps and different definitions of qualifying controllable expenses.

Other factors can arise to further muddy the administrative waters. For instance, what if a new expense is added to the operating expense pool? Does it meet the definition of a controllable expense in the lease such that it should be subject to the existing cap? Should the expense be included as a part of the tenant’s operating expense burden at all? What’s fair to the landlord versus the tenant?

Even with protective language in a lease, there are a number of subjective and administrative factors that might create errors leading to overcharges in a tenant’s operating expense reconciliation statement.

Especially in the current economic environment, tenants have an added incentive to scrutinize their leases and their operating expense statements to ensure landlords have correctly applied caps to the right expense categories and are using the right calculations. By doing so, they can ensure they’re paying exactly what they owe, based on the agreed provisions of their specific leases.