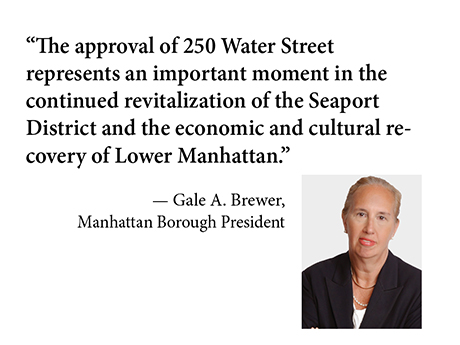 NEW YORK CITY — The Howard Hughes Corp. (NYSE: HHC) has received approval from the City of New York for the development of an $850 million mixed-use project in Manhattan’s Seaport District.

The 26-story building at 250 Water St. will house office, retail and multifamily uses, with the housing component comprising 80 percent market-rate and 20 percent affordable units. The residential element of the project will also include for-sale and for-rent units.

More specifically, current plans for the 324-foot-tall building call for 270 multifamily units to be developed above five stories of office and retail space. The site currently houses a parking lot that spans a full city block.

Skidmore, Owings & Merrill is the architect of the project, which was originally announced in October 2020. The Dallas-based developer estimates that the project will generate more than $1 billion in economic impact, including the creation of more than 3,000 construction and permanent jobs.

Howard Hughes Corp. plans to begin remediation of the site this year, with the commencement of vertical construction to occur after that process is completed.

“This project will play a vital role in New York City’s recovery through the creation of a new mixed-income rental building, office space, neighborhood infrastructure improvements and critical funding to ensure the long-term success of the treasured South Street Seaport Museum,” says Saul Scherl, president of the New York Tri-State region for HHC.

“The approval of 250 Water Street represents an important moment in the continued revitalization of the Seaport district, and the economic and cultural recovery of Lower Manhattan,” adds Manhattan Borough President Gale A. Brewer.

Lastly, the developer has also committed to funding $10 million in enhancements to Titanic Park, a public space that serves as an entry point to the neighborhood.