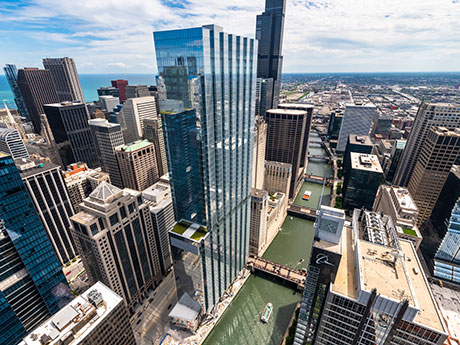 CHICAGO — The Howard Hughes Corp. (NYSE: HHC) has sold its equity interest in 110 North Wacker Drive, a 55-story office tower spanning 1.5 million square feet in Chicago. Callahan Capital Partners and Oak Hill Advisors purchased the stake for $210 million. Based on this sales price, the implied value of the office tower is more than $1 billion, representing the highest valuation for an office property in Chicago since the sale of Willis Tower in 2015, according to Howard Hughes.

The Class A building, located along the Chicago River, opened in October 2020 and was co-developed by Howard Hughes and Riverside Investment and Development Co. The property is more than 82 percent leased by tenants such as Bank of America, Heitman, Lincoln International, Jones Day and Morgan Lewis. Eastdil Secured represented Howard Hughes in the sale.