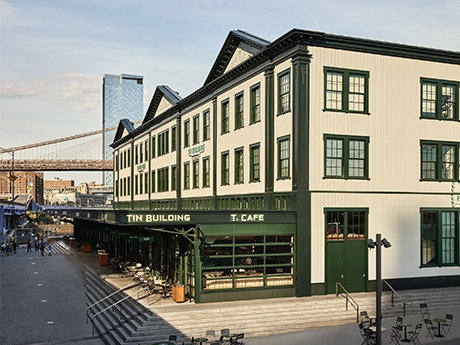 Tin Building by Jean-Georges at Pier 17 at the Seaport in Lower Manhattan has 20 eateries and shops. The food hall is an adaptive reuse of the Tin Building, which was originally constructed in 1907.

NEW YORK CITY — The Howard Hughes Corp. (NYSE: HHC) and chef Jean-Georges Vongerichten have opened the Tin Building by Jean-Georges, a 53,000-square-foot food hall at Pier 17 at the Seaport in Lower Manhattan. The new culinary destination is an adaptive reuse of the Tin Building, a historic waterfront property that once served as the site of the Fulton Fish Market.

“It has been a great privilege to have this opportunity to bring back the Tin Building and reinvent such an iconic New York staple in a new and authentic way — honoring and inspired by the Seaport’s rich history and continuing the legacy of providing a one-of-a-kind experience that pays tribute to the global influences found in New York City,” says Vongerichten.

The eateries include a French brasserie, seafood restaurant (Fulton Fish Co.), Asian speakeasy, breakfast counter, several vegetarian options, a bakery and a coffee shop. Vongerichten curated all 20 installments at the project, which supports more than 700 new jobs, according to The Howard Hughes Corp. 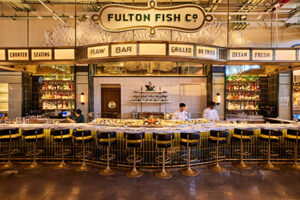 Fulton Fish Co. at the Tin Building by Jean-Georges, which is located at Pier 17 at the Seaport in Lower Manhattan.

“New York City and our central business districts are coming back, thanks in part to creative new projects like this one,” says New York City Mayor Eric Adams. “A true culinary destination, the reconstructed Tin Building combines so many of the ingredients we need to revitalize Lower Manhattan.”

In addition to the eateries and shops, the Tin Building features second-floor dining room and reception space that also serves as The Tasting Studio, a broadcast studio for the video production of cooking segments and the recording of the daily Tin Building podcast.

Over the past 10 years, Howard Hughes Corp. has invested $789 million on the development of Pier 17, the Tin Building and the historic Seaport neighborhood, including rebuilding the piers themselves and other infrastructure along the waterfront. The project team includes interior designer Roman and Williams and interior lighting designer L’Observatoire International, which focused on capturing the historic elements of the Tin Building, which was built in 1907. 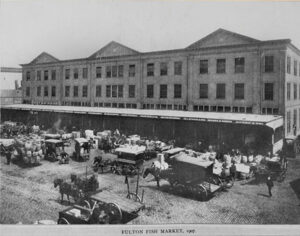 The Howard Hughes Corp. purchased a minority stake in Vongerichten’s company earlier this year. The Woodlands, Texas-based developer plans to expand Jean-Georges Restaurants with new eateries across its national portfolio.

The Howard Hughes Corp. develops and operates several master-planned communities across the country, including the Seaport; Downtown Columbia in Maryland; The Woodlands, The Woodlands Hills and Bridgeland in the greater Houston area; Summerlin in Las Vegas; Ward Village in Honolulu; and Douglas Ranch in Phoenix.