Posted on May 23, 2022 by Taylor Williams in Development, Georgia, Industrial, Southeast, Top Stories 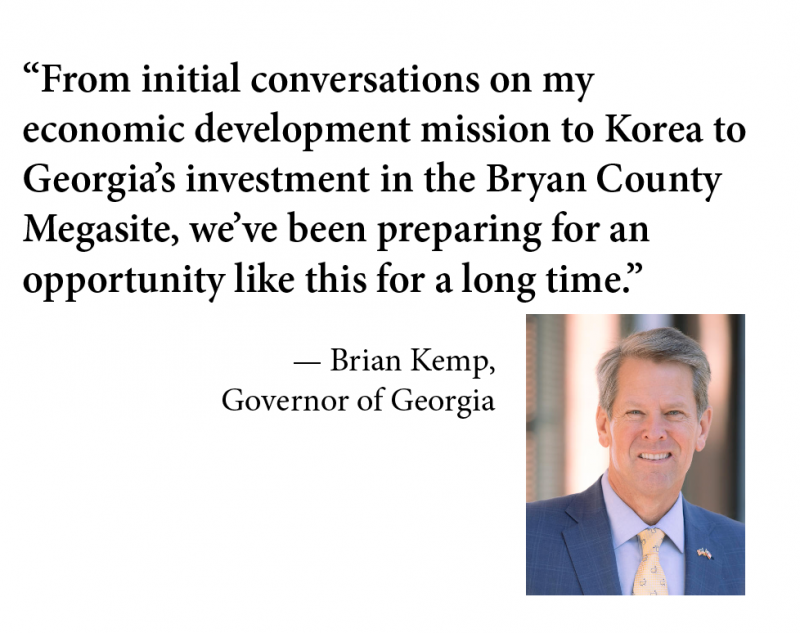 BRYAN COUNTY, GA. — Hyundai Motor Group will open a $5.5 billion manufacturing plant near the coastal Georgia city of Savannah that will be fully dedicated to production of electric vehicles, including batteries. Hyundai expects the facility to be operational within three years.

In addition to Hyundai’s direct investment, various suppliers of the South Korean automaker will invest another $1 billion in the project. Between these initiatives, more than 8,000 new jobs are expected to be added to the local economy.

Known as the Bryan County Megasite, the plant’s location spans nearly 3,000 acres. The site is adjacent to Interstate 16 and is proximate to both Interstate 95 and the Port of Savannah. The Port of Savannah is the fastest-growing container terminal in the country, according to the development team, and is served by two Class I railroads.

A partnership between the Savannah Harbor-Interstate 16 Corridor Joint Development Authority (JDA) and the State of Georgia owns the Bryan County Megasite. The former entity comprises the development authorities of Bryan, Bulloch, Chatham and Effingham counties. The partnership has spent the last several years making infrastructural improvements to the site in order to improve speed-to-market functionalities for the end user.

“From initial conversations on my economic development mission to Korea to Georgia’s investment in the Bryan County Megasite, we’ve been preparing for an opportunity like this for a long time,” says Georgia Gov. Brian Kemp. “With this announcement — the largest economic development project in state history — we will continue to make Georgia the premier destination for quality companies that are creating the jobs of today and tomorrow.

Hyundai expects to begin construction in January 2023. The facility should be operating at full capacity, which entails production of 300,000 units annually, by the first half of 2025. Hyundai intends to utilize artificial intelligence technologies to manufacture its batteries and vehicles. The plant will manufacture several different models, details of which will be released at a future date.

In choosing Georgia, Hyundai cited speed-to-market potential, a desirable workforce and the state’s ability to meet the company’s carbon neutrality standards. Additionally, Georgia is home to an existing network of Hyundai subsidiaries and suppliers.

“We decided to build our first dedicated electric vehicle plant in the United States because America embraces change and drives innovation,” said Jaehoon (Jay) Chang, president and CEO of Hyundai Motor Group. “This new plant is the future of our business, and it will help us meet the growing demands of our U.S. customers who want leading edge design, safe, zero-emission vehicles now and in the future.”

Georgia is the regional leader in electric vehicle registrations per 1,000 registered automobiles and offers more charging outlets per capita than any other state in the Southeast. Since 2020, Georgia has announced more than 20 electric vehicle-related projects with a total capital investment in excess of $13.5 billion that are expected to create more than 18,000 new jobs.