I-85 Corridor Markets See Explosion of Industrial Development, But InterFace Panelists Wonder if Housing Will Follow 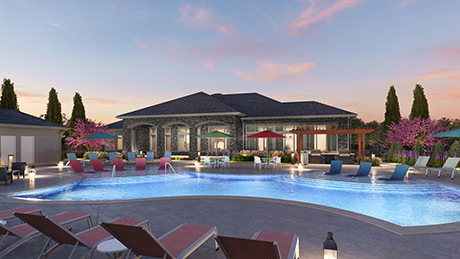 Prose Concord is a 300-unit apartment community in Jefferson, Ga. Alliance Residential Co. developed the community to house the influx of laborers who need housing in Atlanta's Northeast I-85 industrial submarket, which is home to major distribution centers leased to Amazon and Bed Bath & Beyond, among others.

CHARLOTTE, N.C. — During the closing panel at France Media’s InterFace I-85 Industrial Corridor conference, brokers from the major markets along the 666-mile interstate gave updates about developments and opportunities in their territories. During nearly every panel throughout the conference, which was held on Wednesday, April 13 at the Hilton Uptown Charlotte, brokers, investors and developers described the industrial growth along the I-85 Industrial Corridor as “unprecedented.”

“There’s a real lack of supply at the moment, but we have a lot coming,” said John Montgomery, managing director of Colliers’ Upstate South Carolina office, during the conference’s leasing, management and operations panel. “This year there will be four to six spec buildings under construction in Cherokee County alone.”

But for all the new 1 million-square-foot distribution centers and huge advanced manufacturing plants coming to the Carolinas, Richmond, Atlanta and Montgomery, Ala., panelists said that there was a looming question hanging over it all: Where are all the rooftops that are needed to support these new laborers?

“You can’t talk about industrial real estate without talking about residential real estate,” said Jim Anthony, CEO and founder of APG Advisors, during the market updates panel. “The Raleigh-Durham apartment market is now about 97 percent occupied, so where are these people going to live? They literally have no place to live because all the communities around Greensboro, N.C., are full also.”

Anthony mentioned that unfortunately the type of housing needed to house the workers at the plants and warehouses around his home market — such as workforce housing apartments, build-to-rent single-family and manufactured housing — are facing NIMBYism from the surrounding communities.

“We have a dilemma there,” said Antony.

During his keynote address, K.C. Conway, a commercial real estate economist and futurist at Red Shoe Economics, went so far as to say that adequate housing was the No. 1 problem facing the industrial real estate sector in the Southeast for the next handful of years. It’s even more pressing, he added, than rising interest rates and inflation for construction materials — which was north of 24 percent year-over-year in March, according to the U.S. Bureau of Labor Statistics’ (BLS) Producer Price Index.

“We are not doing a very good job with workforce housing,” said Conway. “When you’re out looking at industrial sites, also be thinking ‘Could a manufactured home community go there? Could a for-rent subdivision be on 100 or 200 acres to provide some workforce housing?’ That’s going to be our biggest problem one to three years down the road when we have all this labor and they have no place to live.”

Multifamily developers do seem to be taking the initiative to provide housing in the secondary and tertiary markets that are home to the bulk distribution centers. One example is Prose Concord, a 300-unit apartment community that Alliance Residential Co. just opened in Jefferson, Ga., a northeast suburb of Atlanta along I-85 that hosts Amazon, Bed Bath & Beyond and Toyota among its largest employers.

Labor drives site selection, design
Conway said during his presentation that he’s not worried about labor availability as a long-term issue for the industrial sector, partly because the global companies buying or developing sites along the I-85 Corridor don’t fret about it. He said that automotive giants such as Hyundai and other manufacturers are going to bring 12,000 jobs to the stretch between Montgomery and south Atlanta over the next two years, but the region has practice fulfilling labor needs. “Forget the labor availability issue; we’ve been solving it,” said Conway. “We steal [workers] from Mississippi and Louisiana, the West Coast and the Northeast. We import the labor that we need, or we organically create it with our community colleges.”

The economist said that Amazon and FedEx are also more worried about infrastructural elements such as ports, railways and highways than labor. Warehousing was one of the first employment sectors to fully recapture the jobs lost during the COVID-19 pandemic, according to the BLS. As of March 2022, the transportation and warehousing sector was 608,000 jobs above February 2020, the last month unaffected by the public health crisis.

During the opening development discussion, panelists concurred that labor availability continues to drive site selection decisions made by developers and their end users. John Barker, president and chief development officer of Red Rock Developments, said that labor has become a cog in the supply chain for companies, and the occupiers don’t see everything the way developers do. He told the crowd an anecdote about a third-party logistics (3PL) provider who told him that when deciding between two similar buildings on which to occupy, the 3PL firm always went with the one that is closest to a bus stop.

“That says a little bit about labor and these warehouse facilities, we don’t always think about that,” said Barker.

Steven McGee, director of Rockefeller Group, followed up by saying five years ago a county official told his firm that the industrial site underway needed a sidewalk, but it didn’t make sense to him at the time because the site wasn’t walkable.

“But if you don’t have a sidewalk, you can’t get a bus shelter, and if you don’t have a bus shelter, then you won’t get the labor,” said McGee. “So the things that we pushed back on that didn’t make sense in the short-term from a cost perspective could come back to bite us long-term. We’re trying to take off our merchant-builder hat to put on our long-term capital hat to design to what that site will look like 20 years from now.”