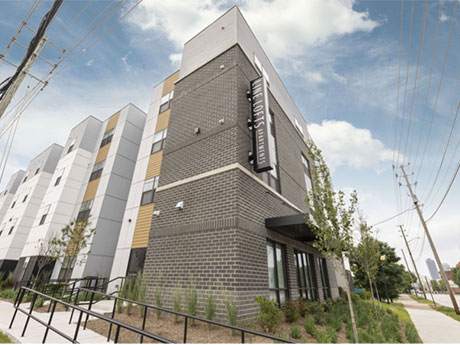 The United States has been experiencing a housing crisis for years, one that is perpetuated by the COVID-19 pandemic. Whether it’s a lack of affordable housing properties for low-income families, a steady increase in housing prices over the years or exponentially high demand for new homes, the U.S. housing market within the past decade has been a wild ride.

In the heart of Indiana, we’re seeing a hopeful trend. Indianapolis (Indy) was ranked as the fourth best housing market positioned for growth in 2022. A variety of factors could contribute to this distinction. For one, Indy is a thriving city and centrally located — not just within the state, but in the U.S. It’s home to two professional sports teams, and recently named one of the best cities for creating tech jobs by Forbes, with Fortune 500 corporations like Eli Lilly and Salesforce headquartered throughout the vibrant downtown. Marquee universities such as IUPUI, Butler and IU Medical School also bring more jobs into the fold.

The 2020 Census found that metropolitan areas like Indianapolis are at the forefront of the state’s growth. Marion County remains the most densely populated county with more than 950,000 residents. Currently, the average price of a rental home in downtown Indy is $1,020, with 45 percent of the households in Indianapolis renter-occupied. Indy also has an 8 percent lower cost of living than the national average.

Throughout the past year, single-family homes in the Indianapolis metro area have been immediately occupied mere weeks after hitting the market. Apartments and other housing options have been developed at a breakneck speed to keep pace with the ongoing, high demands. Whether it’s students graduating from colleges, individuals moving downtown to be closer to work or families looking for affordable options, they’re doing it in Indy.

Our world has flipped upside down given the pandemic, and we’ve seen that affect how we build housing. Working from home has become the new normal, and as such, apartments with built-in office spaces, ample outlets and high-speed connectivity are crucial. Additionally, more people at home means more parking spaces to accommodate everyone at the same time. Now, even spaces for electric vehicles are popping up. Many are looking to live just outside of Indy, such as at Chatham Hills Apartments, a mixed-income development set to open in 2023. While in the suburbs, this development captures the job growth outside of Indy with units starting at $1,100 a month.

According to a 2021 report by the National Low Income Housing Coalition, the shortfall of affordable rental options for very low-income families is estimated at nearly 6.8 million units nationwide. In Indiana, this number is approaching 130,000 units. Supply chain issues have also caused developments to not be built as quickly as necessary. And while monthly rent continues to increase at unprecedented levels, it has left a cohort that has not seen income growth — only adding to the disparity low-income families face.

Underserved populations are in need of affordable housing and housing specifically designed to fit their needs. Line Lofts opened downtown in fall 2021 with 63 two-bedroom units of affordable seniors housing. One-fifth of the units are designed and reserved for seniors with visual impairments, as part of a partnership with local nonprofit Visually Impaired Preschool Services (VIPS), which provides ongoing early intervention services to Indiana’s youngest children with blindness/low vision.

Developers should also work to creatively incorporate affordable housing options wherever they can. The recently announced Rise on Meridian in downtown Indy will open in 2023. Of the units, 5 percent will be reserved for individuals with income less than or equal to 30 percent of the area’s median income (AMI) as a part of the Indianapolis City-County Council’s long-term plans to support redevelopment by approving Tax Increment Financing (TIF) bonds.

Real estate development can be a complex process that takes time. It’s crucial to work with experienced developers who have a vast amount of experience in the housing space. Their level of expertise should be extensive, with clear examples of successfully delivering high-quality housing options from conception to completion.

The city’s willingness to work with developers helps to streamline the housing process and ensure all parties are aligned on goals and priorities. Organizations such as Lift Indy, a community program prioritizing equitable neighborhood revitalization through affordable housing and economic development, helps developers create properties that are prosperous for the community. While we’ve got a long way to go, we’re on the right track.

We can’t predict what will happen throughout 2022, but one thing is for certain — the Indianapolis housing market will continue to boom. We’re prepared to keep up with the demand.