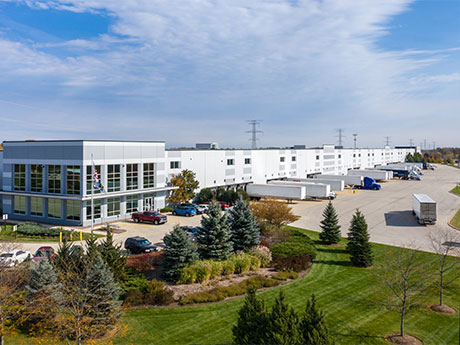 Colliers brokered the sale of this 388,800-square-foot industrial building occupied by Milwaukee Tool in Menomonee Falls. The transaction set a new cap rate record at a low 4 percent figure, and brought in new capital from New York.

Like much of the country, the Milwaukee industrial market flourished over the last 12 to 24 months and has continued to shatter records across the board. Tenant demand far exceeded supply, driving vacancy rates down and rental rates up. Pent-up capital chased deals at record numbers, compressing cap rates further in this sector. And new construction continued its speedy pace, with over 8 million square feet on schedule to be delivered in 2022.

But with inflation surpassing 8 percent and interest rates on the rise, the question now is how long will we continue this record-setting pace?

As supply chain constraints emerged during the pandemic, businesses switched from the widely used just-in-time model to just-in-case, meaning drastic increases in inventory storage and logistic needs for many companies. Tenants scrambled to lease additional space to house what inventory they could get in stock.

At the start of 2021, Class A industrial vacancy in Milwaukee was 9.68 percent. By the end of the year, that number had been slashed in half to just 4.39 percent as the flight to quality industrial product exceeded deliveries. In the fourth quarter of 2021, 1.65 million square feet of new industrial space was delivered, all of which was 100 percent leased. In the first quarter of 2022, that number nearly doubled to 3.06 million square feet of new deliveries.

Forecasting this demand to continue, developers are putting up spec buildings as fast as they can get supplies in. New developments are being announced seemingly daily across the Milwaukee market.

The most active industrial submarket in Milwaukee is in Racine and Kenosha counties along the I-94 Corridor. Positioned between Milwaukee and Chicago, these counties have experienced a renaissance in the last decade with a huge push as of late. Over 76 percent of all speculative development in the Milwaukee MSA is occurring in these two counties.

In March 2022, Illinois-based Becknell Industrial announced the acquisition of 132 acres along the I-94 Corridor in Kenosha County for a two-phase development. Becknell plans to start with a nearly 800,000-square-foot, 40-foot clear height speculative logistics center.

German candy maker Haribo will complete construction on its first North American location in a few months, totaling 500,000 square feet. Kroger just delivered its sixth customer fulfillment center in the U.S. with a total of 330,000 square feet, while General Mills delivered another 323,000 square feet. Nexus Pharma is in the process of constructing a Phase I, $100 million state-of-the-art, three-story manufacturing facility. Amazon continues to gobble up space, with the company announcing the lease of another 1 million square feet of spec space from Venture One in Kenosha.

Historically, Milwaukee industrial cap rates have averaged anywhere from 100 to 200 basis points above neighboring sister city Chicago. But in today’s climate, particularly during 2021, that spread has significantly narrowed to almost zero in some cases. In December 2021, New York-based Apollo Global closed on a 388,800-square-foot, single-tenant net lease deal for a low 4 percent cap rate, setting a new record for the Milwaukee market. The building is located in Menomonee Falls and was leased to Milwaukee Tool. Additional deals in Waukesha, Racine and Kenosha counties traded in the mid to upper 4 percent cap rate range during 2021.

With the 10-year Treasury rate more than double since early December, additional cap rate compression in Milwaukee is unlikely. However, record levels of liquidity and demand are expected to keep cap rates below the historic average for the Milwaukee market.

As we head further into the year, we expect the vacancy rate to increase slightly as new construction deliveries hit the market. 2022 is expected to be another banner year after nearly 6 million square feet of net absorption in 2021. With capital continuing its strong drive for industrial, offering activity and pricing should remain at all-time highs as demand continues to outpace the number of offerings on the market.

Jennifer Huber-Bullock is a senior investment analyst with Colliers Wisconsin. This article originally appeared in the May 2022 issue of Heartland Real Estate Business magazine.