Posted on May 11, 2022 by Katie Sloan in Conference Coverage, Features, Student Housing 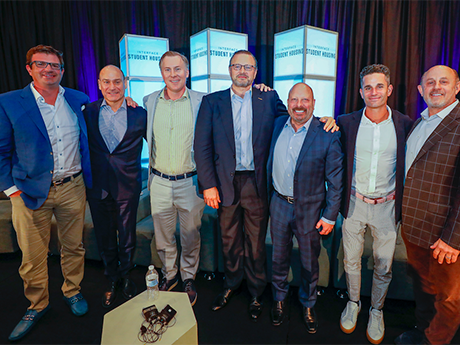 AUSTIN, TEXAS — As we move toward the start of a new academic year, the outlook in the student housing industry keeps getting brighter, according to experts within the industry. All signs point to further movement out of the COVID-19 pandemic — a testament to which was seen at the 14th annual InterFace Student Housing conference in Austin, where over 1,300 attendees gathered last week at the JW Marriott downtown.

The sector’s resilience during the pandemic was once again a major topic at this year’s conference, particularly during the ‘Power Panel,’ which brought together a consortium of high-level executives to discuss industry trends and the outlook for the upcoming academic year.

“Evidenced once again by a packed house in this room, the sector is demonstrating continued strength, resilience and sustainability as a niche real estate asset class,” began moderator Peter Katz, executive director with Institutional Property Advisors (IPA), a division of Marcus & Millichap.

“While 2021 was a record year for many asset classes, one constant that we can expect in life is change,” he continued. “Over the past 90 days, we’ve seen a huge turn of events in the global economic platform. The impact of the COVID-19 pandemic has begun to wane in many ways, inflation is back to multi-decade highs coupled with near-term increases in interest rates. We’ve seen so much volatility in the equity markets, particularly over the past few weeks, yet the investment community and institutional capital seeking to deploy equity is not abated.”

And while additional change is likely in the near term, Katz noted that there continues to be a fundamental focus and desire for investment in commercial real estate — and specifically student housing — on a global scale.

“Emerging from the pandemic, the past 18 months in our sector have been a whirlwind of exciting operational performance,” he said. “These fundamentals have led to exuberance from institutional players seeking to deploy capital in the space with another record year of close to $10.8 billion in transactions primarily fueled by large, one-off asset sales; large portfolio sales; and several recapitalizations.”

IPA forecasts a similar performance to what was seen in 2021 this year, with the primary challenge being the navigation of the crossroads of increasing interest rates with simultaneously outsized year-over-year rent growth within the sector.

Will Investment Activity Continue to Grow?

Looking back at the COVID-19 pandemic, Bill Bayless, CEO at American Campus Communities, noted that the black swan event ultimately proved the investment thesis of student housing, the stability of cash flows and the resiliency of the industry.

“With continued rental rate growth each and every year for the past 17 years and average occupancy of at least 97 percent, people are realizing that the stability of cash flows that this industry provides — especially as we’re approaching times of economic uncertainty once again — is more attractive than it has ever been,” said Bayless. “This industry has finally proven to the global institutional markets that it is one of the best investments you can make in commercial real estate.”

American Campus Communities has made headlines over the past month after it was reported that the company — the largest publicly traded owner, manager and developer of student housing in the U.S. — would be acquired and taken private by Blackstone Inc. A primary topic of conversation throughout the conference was what this consolidation will mean for the industry at large.

Avi Lewittes, chief investment officer with The Scion Group, agreed with Bayless that the industry’s consistency in terms of leasing velocity and the stability of cash flows are lending to continued investment in the space, noting that another major driver is enrollment growth at major universities.

When comparing the investment thesis relative to other commercial real estate classes, Lewittes noted that student housing is considerably more durable than what is otherwise available in other sectors.

“Most analysts are predicting that the outsized rent growth that is being enjoyed by the conventional multifamily sector is likely to subside in 18 to 24 months, whereas the factors that we’re highlighting here for student are expected to be sustainable,” he said.

That sustainability is what will keep the investment market moving this year and for the foreseeable future according to Nick Porter, founder of Global Student Accommodation.

“If you’re looking for those peak returns right at the top of the market, look back at 2007 and 2008,” he said, referring to the lead-up to the Global Financial Crisis. “That’s not what we do. Student housing will always be consistent, but what we won’t have is the troughs when things come off, and that is what folks are investing in. I’m delighted that long-term permanent capital is finding a home with us, and that is what rides us through the economic cycles when you’re taking a 10-year to 15-year view.”

With so much pent-up demand for investment activity comes the question of financing and its availability within the current landscape.

“We still have a very liquid market and our business is currently as institutional as it gets,” said Tim Bradley, principal, founder and CEO with TSB Capital Advisors.

“There is a lot of paper in the market, and as the CMBS market blew up over the past 60 days, where did it go? Banks,” he continued. “Around 90 percent of our financing this past year was bank financing. With fixed rates going up between 4.75 percent and 5 percent, we haven’t seen the shift to core assets taking a discount. There’s just so much capital trying to get into the space right now.”

But the debt markets are still liquid, according to Bradley, the process just takes a great deal longer.

“We have to add an additional two weeks on top of what we initially would’ve seen when we submit opportunities and financing requests to lenders, whether it be life insurance companies, banks or debt funds,” said Bradley. “We think we’ll continue to see a lot of liquidity on the debt side, and with long-term curves going where they are, the conversation is focused on how to hedge deals.”

Turning to construction financing, Bradley noted that it is available, but what you’re able to get boils down to sponsorship and experience. “Delivery is the most critical component with student housing, and it has weeded people out of our business to the point where we think people have learned,” he said.

Katz of IPA noted that the places in which he expects to see the greatest negative leverage cash flow deals close are going to be highly affluent markets that offer the ability to pay outsized rent growth. “Those markets are in high demand as well, so any product that is going to come to market there is going to see significant demand by the investment community,” he said.

Pre-leasing for the upcoming academic year has returned to normal levels after brief uncertainty during the height of the COVID-19 pandemic, and rent growth is expected coming into the new leasing season.


“We’re having a record year,” said Wes Rogers, president and CEO of Landmark Properties. “We have just under 60,000 beds in our portfolio and we’re at about 7.2 percent rent growth right now. We’re hoping that will grow between now and the time when students begin to move in.”

“As of Monday, we were 86.6 percent pre-leased for the upcoming academic year with our ‘uber-core’ projects outperforming at about 91 percent pre-leased and 8.6 percent rent growth,” continued Rogers. “We focus a lot on our construction activity, as well. We have a record number of projects under construction, with $3.2 billion under construction today across about 17 projects. We hope to start a record number of 21 projects this year. Capital is flowing [as capital providers see] the operational performance and record year that the industry is having.”

Marc Lifshin, founder and CEO of Core Spaces, is seeing similar results. “We are sitting around 98 percent occupied right now and we are 95 percent pre-leased for the 2022-2023 academic year,” he said.

“We’re about 15 percent ahead of last year in our same-store portfolio, hovering around 4 percent rent growth,” continued Lifshin. “It sounds good to be at 95 percent, but being at 95 percent when you’re 90 days out from move-in means there’s money left on the table.

“When we look at next year, we’re looking to push rents 8 percent to 10 percent where we think we can make back some of the money that was left into the subsequent year and move forward. It comes down to setting the right strategy between renewals and new leases and how to average out an attainable rent growth.”