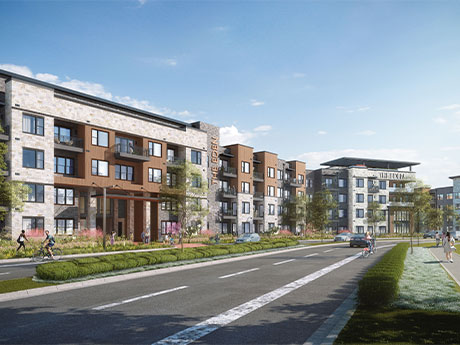 Construction on Pearson Ranch mixed-use development in Austin has begun with The Eden, a 306-unit apartment community. Residents of the Eden will have access to amenities such as a golf simulator room and pool area, as well as easy access to community gardens and a park.

The master plan for the project includes 48 acres of land for a corporate campus, including 2.6 million square feet of office space. Upon completion, the mixed-use property will also include approximately 200,000 square feet of retail, restaurant and community/cultural spaces; two hotels; thousands of residential units; and 30 acres of parks and green space.

Phase I of Pearson Ranch will center on The Eden, an apartment community that will feature 306 one-, two- and three-bedroom units that will range in size from 672 to 1,511 square feet. Residences will be furnished with technology such as smart locks and thermostats, gas appliances, built-in kitchen islands with quartz countertops and in-unit washers and dryers.

Residents will have access to amenities such as a fitness center, rooftop deck, coworking lounge, golf simulator, dog spa, community gardens, a three-acre park and a pool area with barbeque grills, day beds, cabanas and a bocce ball court.

The general contractor for The Eden is NRP Group. The project’s architect is Austin-based Davies Collaborative. Vertical construction on The Eden is scheduled for completion by the end of 2024.